He is possibly the most popular male triathlete on the planet, with 142,000 YouTube subscribers and a steady stream of videos that routinely receive tens of thousands of views. A lot of Lionel Sanders’ popularity is due to his numerous impressive wins, but more so from his frank assessments of his own races, and his numerous gutsy performances where he hasn’t always won, but managed to capture the hearts of his many fans.

His recent runner-up finish at Ironman 70.3 Oceanside serves as a perfect example of that. Sanders followed a decent swim (roughly two minutes behind the leaders) with an average bike ride (for him) that left him well behind starting the run. While eventual winner Jackson Laundry was confident he could hold off a fast-charging Sanders for the win, Alistair Brownlee’s dramatic fade set up a sprint finish between Sanders and Rudy Von Berg, which the Canadian won.

That runner-up finish might possibly be the best thing that happened to Sanders in the build-up to St. George. First off, it was his first “loss” at a 70.3 race since 2017. (That year he finished second to Alistair Brownlee at Ironman 70.3 St. George.) There’s nothing like an end to a streak like that to provide motivation. Secondly, Sanders, and more importantly his coach Mikal Iden, can look at the Oceanside race and figure out exactly what needs to be tweaked in order for Sanders to nail the day in St. George. (To most of us it looks like just a bit of sharpening on the bike …)

In addition to that added motivation, Sanders also appears to be ready for a big day in St. George because he’s getting some good direction. In 2017 Sanders had his best performance at the Ironman World Championship, finishing second that year to Patrick Lange. Much to the surprise of many of us in the triathlon world, Sanders stopped working with David Tilbury-Davis just a few weeks after that performance. Since last fall he’s teamed up with Iden, and appears to be thriving under the new direction.

Related: Keeping Lionel on track – a Q and A with David Tilbury-Davis

Then there’s St. George itself. While the conditions in St. George are likely to be extremely challenging, Sanders won’t have to deal with the same kind of heat he has often struggled with in Hawaii. Instead of insane humidity, St. George could be hot (although the average high in May is 30 C), but considerably “drier” – the humidity levels, especially in May, are pretty much non-existent. This seems to bode well for the Canadian star, especially since he’s been doing so much of his training in Tucson over the last few years.

Sanders has done well in St. George over the years. He won the 70.3 there in 2016, finished second to a very much on form Alistair Brownlee in 2017, won there in 2018 and again last year, where he took a dramatic sprint over Sam Long.

So, can Sanders take the win over a full-distance in St. George? Absolutely. In fact, one might argue that any other winner will have to “beat” Sanders for the title. While that seems like a given, let me explain. When he is in form, there are very few athletes who can bike and run faster than Sanders. Gustav Iden certainly proved that he could at Ironman Florida last year, but that race might not be a great example because the swim was a bit abnormal thanks to the big currents, and Iden might not have had the lead he would normally have enjoyed over Sanders into T1. Instead he was able to ride behind Sanders almost throughout the bike, letting the more experienced Canadian pace accordingly, setting up the run duel between the two. (Iden would eventually pull clear over the last 10 km.) In St. George there will be a big contingent of fast swimmers who won’t be inclined to wait around for Sanders and let him into the race. With a lead of possibly four minutes onto the bike, the likes of Jan Frodeno, Kristian Blummenfelt, Alistair Brownlee and possibly Iden are going to push the pace early in order to make it difficult for Sanders to get into the picture. Sanders’ chances of winning are good if he is able to get to the front by the halfway point of the race. Then he’ll be able to make the leaders work even harder over the last half of a very tough bike. The harder the day’s effort, the better the chances for a man who simply loves to hurt himself, and his competition, on race day.

Catching the leaders towards the end of the bike doesn’t help Sanders as much. Sure, he can push the pace on the run, but in a footrace against Jan Frodeno, Kristian Blummenfelt, Brownlee (provided he can figure out what caused his fade in Oceanside) and Gustav Iden, Sanders might not fare as well. 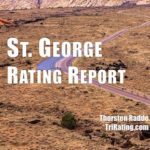 This is an excerpt from Thorsten Radde’s St. George Rating Report. It contains a look back on 2019’s male and female pro races, information about St. George and the Ironman World Championship, a summary of qualifying and who will be on the startline, plus lots of predictions and discussion on the individual strengths and weaknesses of the participants. Check out trirating.com to read other half- and full-distance race predictions and analysis.