Over the last 18 months Norway’s Kristian Blummenfelt has easily been triathlon’s most dominant figure. He began 2021 with a bang, taking the World Triathlon Championship Yokohama, and followed that up with a win at the World Triathlon Cup Lisbon. Then he took the Olympic title, followed that up a few weeks later with a win at the Edmonton Grand Final, which ensured he would take the world championship. Blummenfelt then set his sights on winning the Ironman World Championship – he was determined to become the first person to win Olympic gold and the Kona title in the same year. That goal had to be put on hold when Ironman postponed the Kona event, but Blummenfelt would go on to compete at Ironman Cozumel, setting a new Ironman record with his 7:21:11 finish, the dominating Clash Daytona a few weeks later.

Blummenfelt would technically achieve his goal, winning the rescheduled 2021 Ironman World Championship in St. George in May, then “won” the Sub7 project event, finishing that full-distance effort (he was allowed to draft on the bike) in 6:44:25. He would take second to his countryman Gustav Iden at the PTO Canadian Open in Edmonton after cramping on the run, then posted the day’s fastest time at the Collins Cup. He followed that up with a third-place finish at the Ironman World Championship in Hawaii, then took the Ironman 70.3 world title in St. George last weekend. 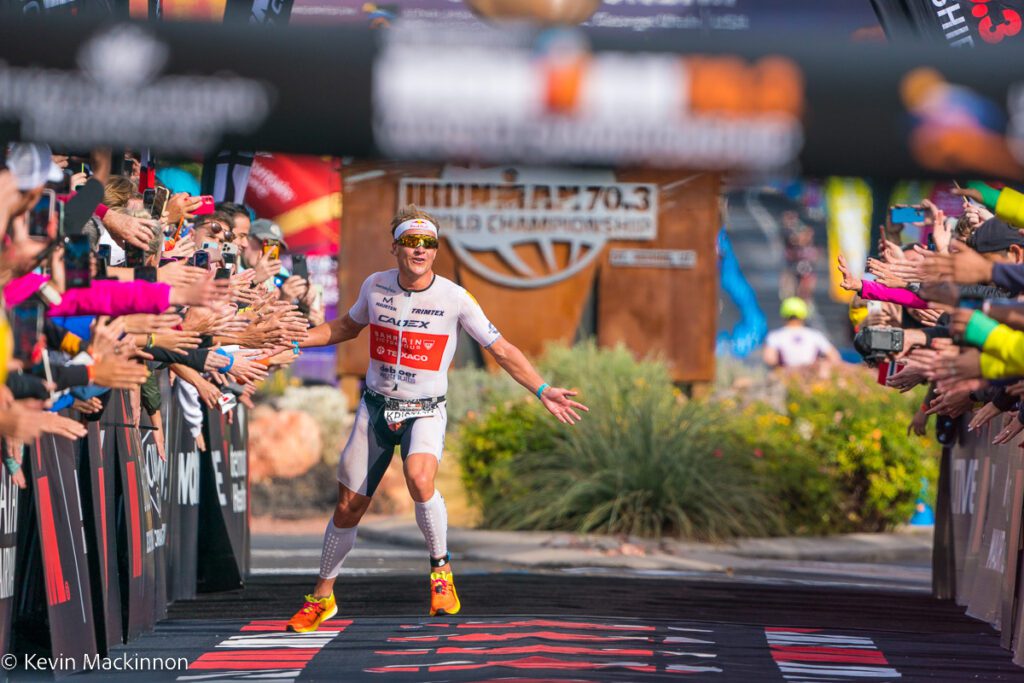 In case it’s not completely obvious, Blummenfelt loves to win. He is now the only person to have won an Olympic gold, the World Triathlon world title, the Ironman world title and the Ironman 70.3 world title. And he’s determined to continue to add to all that. While most would be thrilled with a third-place finish in Kona on their first attempt, the Olympic champ spent the three weeks in between the race in Hawaii and the 70.3 worlds in St. George getting himself fired up.

“After winning in St. George, you want to keep winning,” he said. “My dream was to go to Kona and win it. Third place isn’t the same. That’s been on my mind the last three weeks. You try to think about why you didn’t win. Of course I didn’t have the legs on the day, but then you try to find the answer to why you didn’t have the legs on the day and think about the build up, what I could have done differently.”

“A win here doesn’t change anything with Kona, but it’s nice to win,” he continued. “Gustav (Iden, the Kona champion) felt a bit down after his win three weeks ago, and he found it tricky to stay motivated. I had a different race, I really wanted to come back again … to finish off the season in a good way with short distance next week and Abu Dhabi in one month.”

While we’ve seen Olympic medalists win in Kona before (Michellie Jones took silver at the 2000 Games in Sidney, then won the Ironman world title in 2006, while Jan Frodeno took Olympic gold in 2008 and three Kona titles in 2015, 2016 and 2019), once those athletes have moved to the longer distances they’ve never tried to return to the top levels of draft legal racing. Blummenfelt and Iden have both made it clear they’re aiming to compete in Paris at the 2024 Games.

“The challenge is what’s really driving us,” Blummenfelt said after his win in St. George. “People say it’s not possible, to go so quickly over (to long distance racing) and we’ve proven that we can do so. It’s the same with going back. It’s an awesome journey. I love all aspects of triathlon. I am a big fan of swim, bike and run. When people ask me what my favourite distance is, it’s hard to tell. Half, full, Olympic, I just like them all.”

Blummenfelt has competed in one sprint-distance, draft-legal race this year, the World Triathlon Cup Bergen in his hometown in Norway. There he was out sprinted by Dorian Coninx for the win, thrilling the hometown crowd with his silver medal. Despite coming off both the Ironman and the Ironman 70.3 world championship events, Blummenfelt is looking to be competitive once again at two upcoming draft-legal, Olympic-distance races – this weekend’s WTCS Bermuda, and the WTCS Grand Final in Abu Dhabi.

Blummenfelt and Iden will arrive in Bermuda on Thursday and have a few bike rides on their road bikes before Sunday’s race.

“Abu Dhabi is more realistic for the win,” Blummenfelt said. “I hope to be up there and at least fighting for a podium in Bermuda and starting the Olympic qualification process. It would be nice to have enough decent qualification performances in the first qualification period.”

A podium finish in Bermuda this weekend would be no small feat for the Norwegian, but it seems crazy to bet against Blummenfelt. He’s managed to defy what we’ve typically assumed are the typical triathlon norms for a few years now – will he continue that trend this weekend?