We’re no strangers to Sam Holness here at Triathlon Magazine Canada – he graced the cover of our September issue last year. Holness is “a triathlete that just happens to have autism. He has recently been getting lots of media attention because he’s laid out his goals for 2021 – which include trying to make it to the Ironman World Championship. He’s entered in Ironman Mallorca in May. If he can make it to the Big Island, he’d become the first autistic athlete to compete at the worlds in Kona.

“My name is Sam Holness,” he says in a video produced by Hoka One One (see below). “I’m 26 years old and I live in London in the UK. My nickname is Super-Sam. I am a triathlete that just happens to have autism, and I’m going be awesome. Sometimes when I to to an event I am the only black triathlete, and maybe the only one with autism. Autism is an advantage – I am very focused, and I’m not easily distracted. I train hard and want to be successful. I just never give up. If other athletes pass me, I want to catch them and get back in front. Like ‘come on legs, go faster! Get to the front.’”

“Most people don’t understand autism,” he continues in the video that was shot near his home in November, 2019. “If I can show people that someone with autism can be a successful triathlete, then it will motivate people. I enjoy doing triathlons because it gives me confidence and improves my self esteem. I want to go to the triathlon world championships, or maybe Kona one day. I want to show that people with autism can participate in sport. In fact, autism is a strength and athletes from any background can be great triathletes. All you need to do is get out there and get active. Don’t let your disability be a reason for not doing sport.” 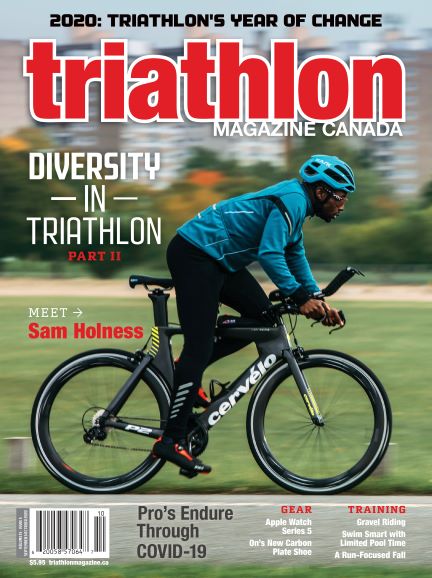 He’s not kidding about being awesome, either. He already is. Sam trains up to 20 hours a week under the careful guidance of his father, Anthony, who works with various specialist coaches to hone his son’s skills. One of the challenges Anthony found when he was trying to find coaches for Sam was that they didn’t expect much. It doesn’t take long, though, before they come to realize just how easy it is to work with Sam, and how much they can expect from him. “You tell him what to do and he simply does it,” Anthony says, whether what you’re asking of him is a three hour bike ride on a wind trainer or a hard running set.

Late for a session? Never going to happen. If the bus doesn’t arrive on time, or the car won’t start, Sam has been known to run four miles at top speed to make sure he gets to class on time. It’s that kind of dedication that earned him his BSc in Sports Science at St. Mary’s University.

That doesn’t mean there haven’t been challenges. Sam’s autism, which was diagnosed when he was four, meant he didn’t develop the motor skills and balance so he could learn to ride a bike until he was 14. He didn’t join a running club until he was 18.

Ever since he did his first sprint triathlon in 2016 he’s been hooked on the sport. He loves what he’s doing, as do his parents.

“As parents, we didn’t know what would happen after he finished university,” Anthony says. “Only 16 per cent of people with autism have full-time jobs. Triathlon gave him so much confidence and self esteem.”

Anthony hopes that Sam’s future includes triathlon, and its hard to imagine how it won’t. Sam wants to coach some day, and continue to enjoy what he loves most about running down a finishing chute at the end of a race: “I’m excited to inspire people.”