“This is a good thing,” Rose Reilly said to me as her husband Mike wrapped up his final awards banquet at the Ironman World Championship. “It’s time for him to move on and have the chance to spend more time with the kids.” (The kids are the couple’s two grandsons.)

She’s right. For more than 30 years Reilly has been considered “The Voice of Ironman” thanks to his tireless work at finish lines around the world. He began his incredible career in 1989 at the Ironman World Championship in Kona. A few years later he was the first to coin the expression “You are an Ironman,” which has become a mantra for those finishing Ironman events ever since.

“After 1,000 endurance events, 210 Ironman events since 1989, yelling out those words almost half a million times, at the end of this year I’ll be hanging up my microphone,” Reilly said a few weeks before his final announcing gig on the Big Island. “You have always been so close family to me,” he said to his many Ironman fans around the world. 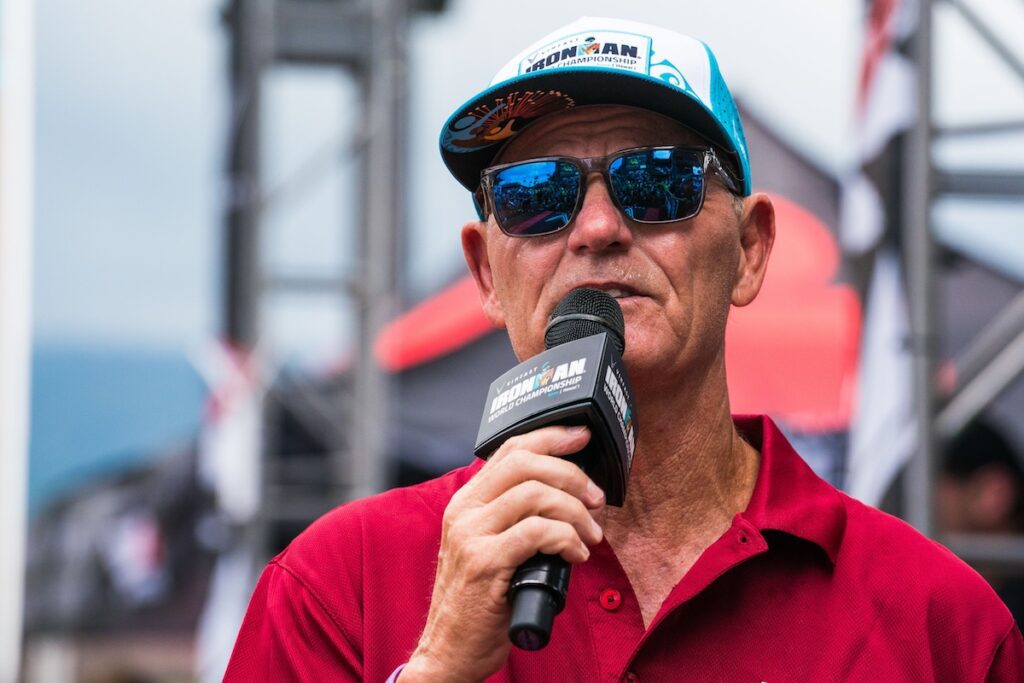 “Being down at the finish line when they came across in 1989 was one of the most profoundly moving experiences of my life,” Reilly wrote in his book “Finding my Voice,” co-written by Lee Gruenfeld. It must have been – it wasn’t long before he had become an integral part of what it means to be an Ironman. Reilly has called about a half-million athletes across various finish lines. He’s been inducted in the Ironman Hall of Fame, the USA Triathlon Hall of Fame and the Running USA Hall of Champions.

After a weekend where we saw one of Ironman’s greatest days of racing, everyone who was at the Ironman World Championship got to witness what I think is one of Ironman’s finest moments: Mike Reilly was inducted into the Ironman Hall of Fame. How amazing was the moment? Even Reilly, “The Voice of Ironman” was speechless. Reilly has become an icon in the world of Ironman racing. His big booming voice, and boundless energy, help make the Ironman experience so special for all the competitors. Having “the voice” announce your name across the line is almost synonymous with becoming an Ironman finisher. Some athletes have been known to track him down after the race if he had been on a break when they crossed.

Reilly obliged – getting more than a few stares from passers-by, but also a few knowing smiles from other Ironman athletes heading home – they knew exactly what was going on.

As great as that voice is, as incredible as his energy and enthusiasm are, here’s what’s most appropriate about Reilly becoming part of the Ironman Hall of Fame: what you all see at the finish line and on the awards stage is 100 per cent genuine. Reilly is kind, thoughtful, positive and endlessly enthusiastic.

This weekend Reilly announced his final Ironman event in New Zealand. That put him at 214 Ironman events around the world. The last athlete he called across a finish line was Ron Skelton, a 63-year-old finishing his 35th Ironman New Zealand race in 16:52:52. A legend calling across a legend.

“I feel elated, I feel loved, I feel passion and I feel I gave it everything I had for 33 years for the athletes because that’s what it’s all about,” Reilly said after the race. “I feel it’s time, it’s definitely time, because I wanted to make sure that every time I called someone an Ironman it was like the first one, and tonight proved that to me.”

“I want to say that I’ve seen it right before my very eyes at finish lines all over the world, that truly ‘Anything is Possible,’ it’s not just three words,” he continued. “People have overcome so much to get to an Ironman start line and an Ironman finish line, and what I say to you, if you think you can, you will. Do it and watch how your life will change for the rest of your life. I can’t wait to see you do it from afar.”

Even though Rose is right, Mike has every right to move on from the demands of Ironman race announcing, it doesn’t mean we have to like it. We’ll miss Mike Reilly at finish lines around the world. But those words he coined 30 years ago will forever be an integral part of what it means to finish a full-distance race. Mike Reilly, you have made Ironman so much better by just being you. Thanks for sharing him for all those years, Rose.

In celebration of his career and to give back to the Ironman and Ironman 70.3 race communities Reilly, along with the Ironman Foundation which Reilly serves as an Ironman Foundation Captain, is auctioning one-of-a-kind Ironman collectibles to benefit race communities around the globe. The auction will showcase a rally towel used by Reilly during his final season as the “Voice of Ironman” before his retirement, as well as official finish line tapes from the 2022 Ironman World Championship and Ironman 70.3 World Championship autographed by the top professional men and women finishers.

The rally towel up for auction has been used by Mike Reilly at nearly all of the Ironman races he has called for the past ten years; it has “Anything is Possible” inscribed on the front, embroidered with Mike Reilly’s signature and will be placed in a shadow box display provided by Fond Memories Graphics. Bidding on these items is open now through 11:59 p.m. ET on December 16, 202 by visiting www.ironmanfoundation.org.