You could say that Brentwood Bay’s Robert Johnson was your typical “All- Canadian Kid.” Growing up in Chilliwack, B.C., in the ’80s and ’90s, Johnson participated in the typical Canadian sports such as basketball, soccer and, of course, hockey. He also dabbled with running and recalls one of the moments he realized he had some leg speed.

“My dad and I would always go run around the track and I noticed at about 13 years old [that] I started to beat him,” says Johnson.

His running talents stayed hidden for a number of years, though, while he attended university and played a lot of hockey, acting as a “ringer” for his fraternity’s hockey team.

Like many Canadians, he remembers being inspired by Simon Whitfield’s performance at the 2000 Sydney Olympics, but it took some trash talking to get him to enter his first triathlon. After chiding his co-workers about their 10K times, they challenged him to enter a triathlon. He took on the challenge, but there was one problem: he couldn’t really swim. Fortunately for Johnson, the swim segment of his first race was in Harrison Bay, where the water was only waist deep, so he was able to walk it. After having a respectable bike leg on a borrowed bike, Johnson got to the run, took the lead, won the race and silenced his work buddies. 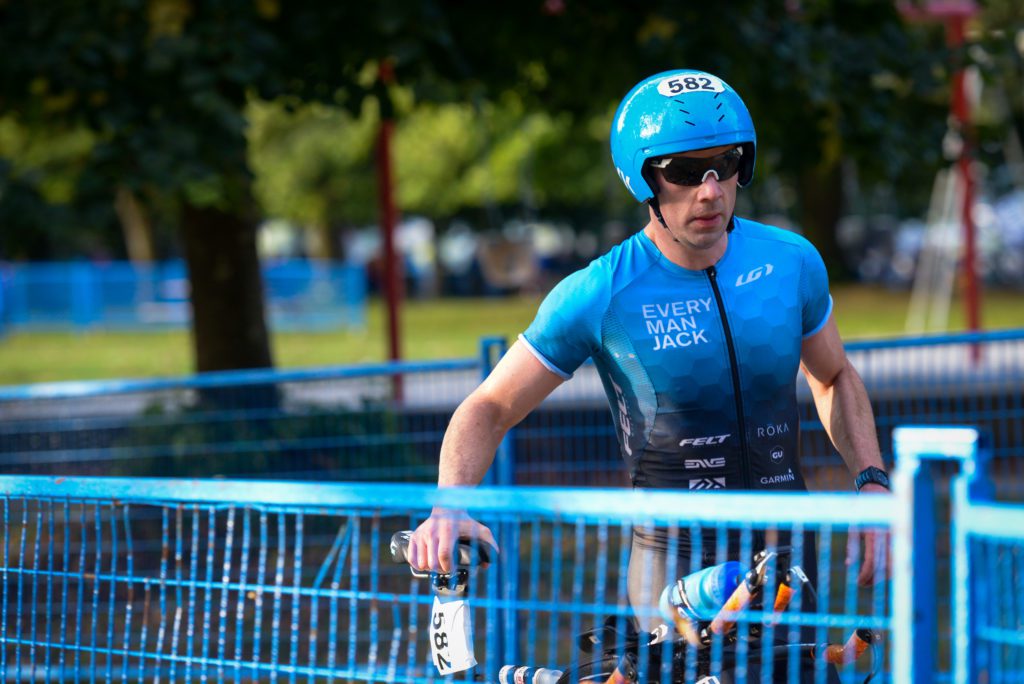 Johnson’s early success served as a catalyst for him to take the sport seriously. He joined the Leading Edge Triathlon Club in Vancouver. Working with coach Alan Carlsson and a group of high-calibre triathletes helped transform the former hockey player into one of B.C.’s fastest age-group triathletes, which culminated with his gold medal in the 30 to 34 age group at the 2014 ITU Grand Final in Edmonton. His 19:55 1,500-metre swim split proved he was a different athlete than the guy who walked the swim at Harrison Bay just a few years earlier.

Johnson’s consistent performances caught the attention of Ritch Viola, who invited him to join the American-based Every Man Jack Triathlon Team. Johnson says his teammates are supportive, high achieving athletes, and he is motivated by them. In addition to the camaraderie, the team’s spring training camp in Las Vegas has become one of Johnson’s highlights of the season.

Like so many other triathletes, some of Johnson’s race seasons have been compromised by injury, but Johnson’s main injury was probably unlike any other suffered by a triathlete: while celebrating his victory at the 5150 Triathlon in Vancouver, his “trophy” (a glass of beer) shattered in his hand and severed tendons in his fingers. It took surgery and three months in a brace for his hand to heal.

Another thing that separates Johnson from the rest of his speedy peers is his focus on short- course racing; he has no desire to do an Ironman.

“I did a couple of 70.3 races, but didn’t enjoy the experience, so I decided to go back to short course racing,” he says.

One of the short course races on his schedule in 2019 is the Apple Triathlon in Kelowna. Last year, Johnson looked to have a great performance there, but the race was cancelled due to poor air quality. This year’s race has been scheduled for the first weekend in July, which will hopefully prevent another “smoke-out” and gives Johnson another chance to take care of some unfinished business.

Mission B.C.’s Kevin Heinz is the host of the Fitspeek podcast, fitspeek.com.