From where the rest of the world was looking, Kristian Blummenfelt enjoyed a magical season in 2021. Sure, he didn’t win all his races, but other than a tough day thanks to a mechanical issue at the Ironman 70.3 World Championships, the Norwegian excelled at all the major events he participated in this year.

And, while Blummenfelt certainly agrees that it was a fantastic year that began with his second WTCS win in Yokohama and just kept building as he took Olympic gold and the WTCS championship, he had visualized even more.

“I dreamed about taking the Olympics and the World Championship and Hawaii and also the 70.3 worlds in one year before COVID kicked in,” Blummenfelt says. “It’s one thing to dream about it, and another thing to perform at all those distances in one year. It was almost like the perfect year.”

How serious was Blummenfelt about taking the Kona title? A few days after the Olympics he put in a monstrous training day to prepare for his Ironman debut at the Ironman European Championships in Frankfurt. He planned to skip WTCS Montreal to compete in Frankfurt, then go after the world championship title at the WTCS Grand Final in Edmonton. When Ironman gave Blummenfelt and women’s Olympic gold medalist Flora Duffy a slot for the Ironman World Championship in Hawaii, Blummenfelt was able to skip the race in Frankfurt to focus on the race in Edmonton. 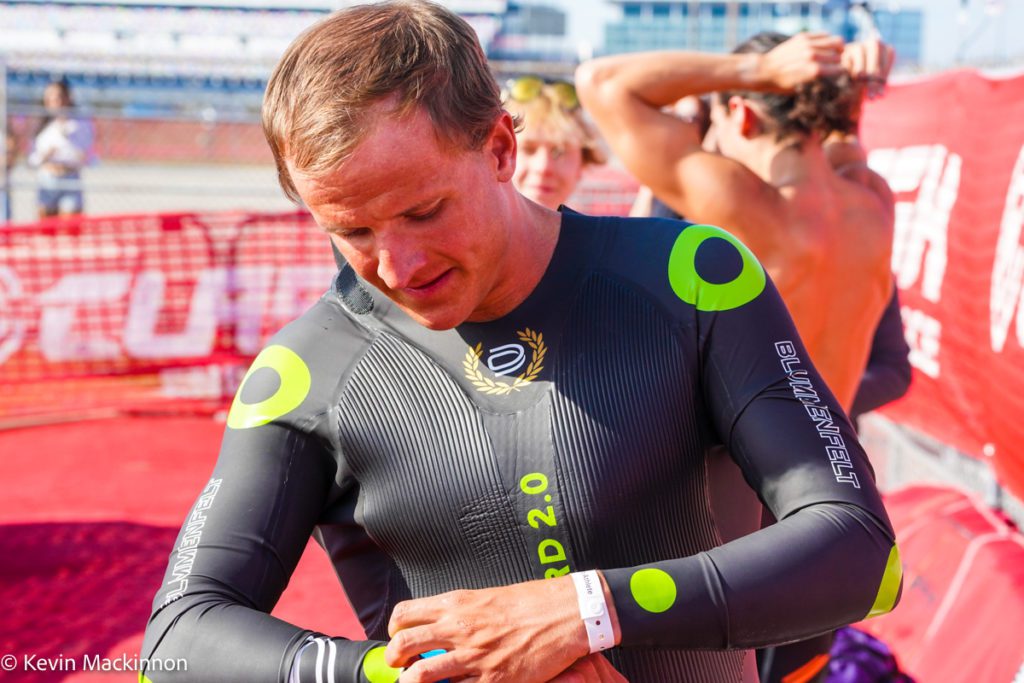 Even after taking the world title in Edmonton, Blummenfelt kept pushing for more results. There was never any thought of kicking back and enjoying the Olympic or world titles.

“I enjoy racing,” Blummenfelt says. “Going to the race itself is my party. I don’t like to do the party after the race. I look forward to the race and, when I’ve really smashed that, I just want to keep going. I love to race and I love to perform.”

“I tend to respond well when I’m racing week after week back to back like that,” Blummenfelt says. “So that’s what we did in April and May with Yokohama, Lisbon, then I had some stomach issues going into Arzachena, so I was actually pleased with getting seventh there and feeling like I was in the mix even though I was feeling flat going into it. And Leeds was a good experience – I was cramping up on the run in my hamstrings. [Blummenfelt finished sixth.] It was good to get that experience six weeks out from the Games, because it gave me time to make some adjustments on the bike. I moved my saddle a bit more forward to put more pressure on the quads instead (of the hamstrings). And the result in Leeds maybe put more pressure on Alex Yee before the Games. [Yee won.] So, I think Leeds was a good race in terms of experience. Then getting some good preparation at altitude then in Miyazaki together with the Japanese team before the Games was really, really good. I was able to do the race that I was dreaming about.”

The race in Tokyo was the culmination of a process those of us lucky enough to watch the WTCS Grand Final in Lausanne saw starting in 2019. On that day Blummenfelt would run away from the world’s best triathletes, just as he did in Tokyo. In 2019, though, Blummenfelt hadn’t been considered as big a threat for the win.

“2019 was a big struggle,” Blummenfelt says when asked if that race at Lausanne was the turning point. “Early in the season we went to Thailand for heat prep and I got a virus there and got really smashed. After that camp we went to Abu Dhabi to start the season, and I knew I shouldn’t have been on the start list there, finishing 32nd, and the same happened in Leeds. I was really struggling to respond to the training.”

After a block of altitude training in 2019 Blummenfelt felt good going into the Tokyo Test event, but would crash on the bike.

“I was really pissed off because I hadn’t performed,” he remembers. “Two weeks later to come back at the Grand Final – I feel like it saved the season.”

It also served as a confidence booster that would help Blummenfelt to gold in Tokyo two years later.

“I think you need to believe in yourself,” he says. “It’s easier when you get rolling.”

Now Blummenfelt and Iden have that same “rolling” feeling going for long-distance racing. Iden took the 70.3 worlds, then raced to an impressive Ironman debut win over Lionel Sanders at Ironman Florida.

Then it was Blummenfelt’s turn to show the world that there’s a new generation of long-distance athletes on the scene, blazing to an incredible 7:21 finish on a rainy day at Ironman Cozumel.

“It’s a new area,” Blummenfelt says.” 70.3 is quite close to what we do, but the pace we have to keep for an Ironman is something much slower. In a short distance we run maybe three-minute pace. In a half-Ironman you have to run 3:10, maybe. But, in an Ironman you have to drop back another 30 seconds, so it’s a completely new. We’ve tried to learn along the way. We got some good answers in Cozumel, but for sure there is more to gain there. For example being able to drop the pace closer to the 70.3 pace. To find out how we can do that is part of the journey.”

Less than two weeks after that performance Blummenfelt bounced back for an incredible win at Clash Daytona. All of which makes it seem possible for Blummenfelt to do the seemingly impossible next year – win the two Ironman World Championship events in St. George and Kona, while also taking on the sub-7 project where he and Alistair Brownlee will try to break the seven-hour barrier for a full-distance triathlon.

“With St. George in May, then a few weeks after we have the sub-7, then two or three months after that we’ve got Hawaii, so there’s plenty of time to recover,” he says. “So it’s a matter of doing the training right and going to altitude and find the balance. I think the key is to stay injury free.”