The first time I saw American Taylor Knibb racing was in Monterey, Mexico in 2014. It was the PATCO Triathlon American Youth Olympic Games Qualifier and, despite being a year younger than many of the women in the race, the 16-year-old led the way out of the water, then opened up a gap of 90 seconds on the group chasing her. In the end she would get pipped to the line by her countrywoman Stephanie Jenks. (Knibb would on to take the silver medal at the world juniors in 2015 before winning the title in 2016 and 2017, then take the U23 world title in 2018.)

Knibb might not have won that day in Monterey, but I never forgot that race, and kept thinking of it in August, 2021, at the World Triathlon Championship Series (WTCS) Grand Final in Edmonton. Seven years later, against the best draft-legal triathletes in the world, Knibb once again led the way out of the water. She followed that up with a dominant bike that saw her hit T2 2:44 ahead of the main pack that included many of the pre-race favourites, including Bermudan Olympic champ, Flora Duffy.

There was no touching Knibb that day as she held steady on the run, losing almost two minutes of her lead, but still winning the race by just under a minute over France’s Leonie Periault, with Duffy rounding out the podium. Duffy would take the world title based on the entire season of racing, but Knibb served notice to the world that she was a force to be reckoned with.

In Edmonton Knibb proved to us all that her win earlier in the year in Yokohama, where she qualified for the US Olympic team, was no fluke and that she was very much the heir apparent to Duffy on the world stage. Ironically, Duffy might have helped set the stage for the race in Edmonton – in 2017 Duffy was happy to bring Knibb along when the pair broke away from the women’s field on the bike, eventually outrunning the young American to take the win, while Knibb would hang on for second.

Here’s what I haven’t told you so far about how even more impressive that race in Edmonton was. I haven’t told you that in the whirlwind 25 days before, Knibb had a “disappointing” (her words, I promise) individual race in Tokyo, where she finished 16th. I haven’t mentioned that she was put on the mixed relay team in Tokyo, and helped the United States earn a silver medal. Or that she almost didn’t race the elite event in Edmonton. She had hoped to compete in both the U23 and Elite races at the Grand Final, but when the organizers moved both races to the Saturday (originally the U23 race was scheduled for the Friday, so she figured she could do both), she opted for just the elite event. I also haven’t mentioned that, as preparation for that upcoming double, she figured she would jump into Ironman 70.3 Boulder for her first half-distance race, just two weeks before the Grand Final. (She would finish second, despite racing on her road bike.) Finally, I neglected to mention that a week before the race in Edmonton she took second at WTCS Montreal.

So that was the whirlwind of racing post Tokyo. Which should have been enough. A week after that huge day, Knibb took things to a completely different level. After dominating the best short-course athletes in the world, she would do the same with the world’s best long-course athletes at the Collins Cup in Samorin, Slovakia, beating Daniela Ryf in her match and posting the day’s fastest performance overall, beating Lucy Charles-Barclay by over 3:30 – once again while riding a road bike.

Coming back even stronger in 2022

Knibb returned to racing in 2022 with another dominant win at Ironman 70.3 Oceanside, this time on a triathlon bike thanks to a newly-signed deal with Trek. After that, though, she spent much of the summer injured. When she arrived at the PTO US Open in Dallas in September, it turned out that the race was to serve as a tune up for an upcoming WTCS event.

“In Dallas the whole aim of racing was for Cagliari,” Knibb said. “I didn’t want my first race in five months to be a WTCS race. So, I talked with USA Triathlon and they said yes, we think you can race Dallas to get that racing feel back.”

“The irony was that I’d only been doing walk runs up to that point,” Knibb said about her training leading up to the Dallas race. “Granted, some of the walk runs had been 20 mins of running and one minute of walking, and there were still intervals in there, so in the race I just kept the walk running going.”

After a solid swim, Knibb dominated the bike in Dallas, hitting T2 well ahead of her competition, but would be run down by Ashleigh Gentle (who made up almost seven minutes on the American) and have to “settle” with second place. She would follow that up a week later with a third-place finish at WTCS Cagliari.

“I didn’t want to say ‘the only reason I’m here is for Cagliari,’ and Dallas went really well,” Knibb said later. “I had a good swim and bike [in Dallas], but the run was, well, you saw. In Cagliari I had a horrible swim, but then I biked and I ran well. The run shocked me – to be able to run with Georgia Taylor-Brown and Emma Lombardi for 5 km was insane in my mind.”

Then came the stunning win in St. George, where Knibb improved on her third-place finish at the Ironman 70.3 World Championship last year with a dominating display to easily beat the world’s best half-distance triathletes. 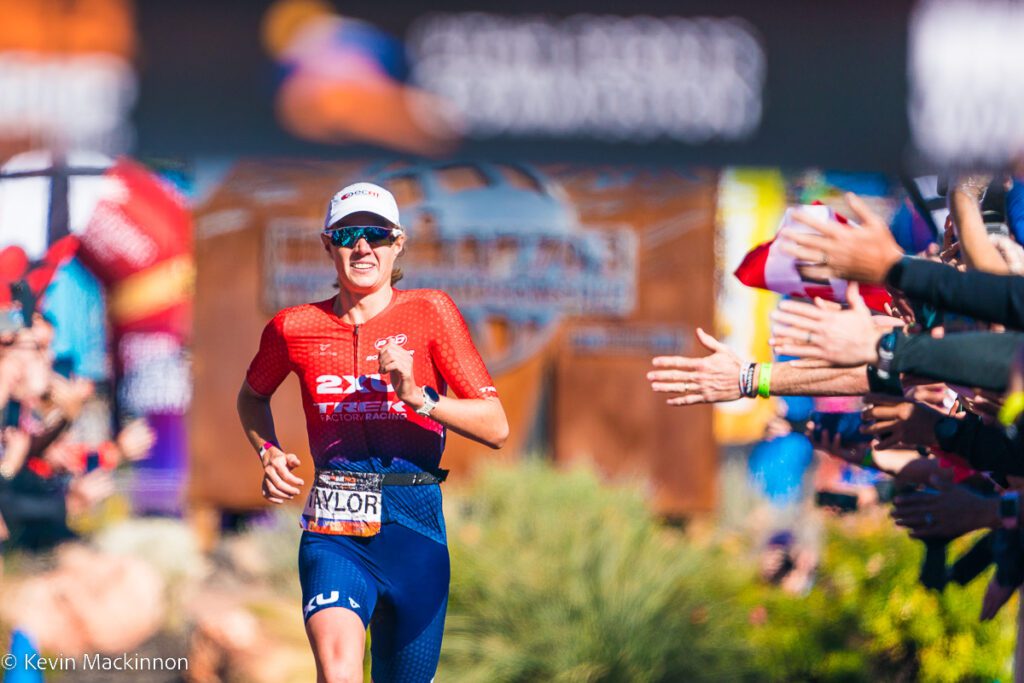 A week later she would finish second to Duffy at WTCS Bermuda, proving that she truly has mastered both short- and long-distance racing.

“Everyone keeps talking about the balance, and I feel that with “balance” that implies that one is detracting from the other,” Knibb said when asked how she’s managed to excel at a variety of distances over the last year. “I think, at the end of the day, the whole aim of me racing these races is to minimize travel, to continue training and to still race the best women and learn new things. I think it’s more of building a career versus balancing the two distances, and the two build on each other. I was injured this summer so we’ll see – it’s not always perfect, but I’m grateful for the experience and to learn a lot of new things.”

Learning, and the experience, is a big deal for Knibb, and possibly the most important reason she’s becoming one of the sport’s biggest stars.

“The origin of the word compete from the latin is ‘to meet, to come together,’” she said, providing the first hint of just how well-rounded she is, while displaying the kind of insight one would expect from a Psychology graduate from Cornell. “So, when you look at competition that way, bringing the best out of yourself and doing it together, it’s a different way of looking at things as opposed to ‘I need to demolish you,’ which is what it has turned into. But, it’s actually just finding the best in yourself.”

Knibb’s success over all these years has come because she’s truly searching to find out what her best might be. Having taken up the sport after watching her mother compete in Ironman races, it becomes apparent that all this has been a search for excellence. A very driven search for excellence, no doubt. (Ivy League education while winning world titles – seriously?) Along the way the people who have coached Knibb have set her up for success. At Cornell she competed on the swim, track, cross country and diving teams. She would take 109th at the NCAA championships, learning exactly what it’s like to run with some of the best runners in the country. She would swim 500-yard races, developing the kind of speed it takes to lead the way out of the water at a WTCS race.

“I’m very grateful,” she said, when asked what she was feeling about her huge win at the Ironman 70.3 World Championship. “I am in shock.”

She might have been, but the rest of us weren’t at all.