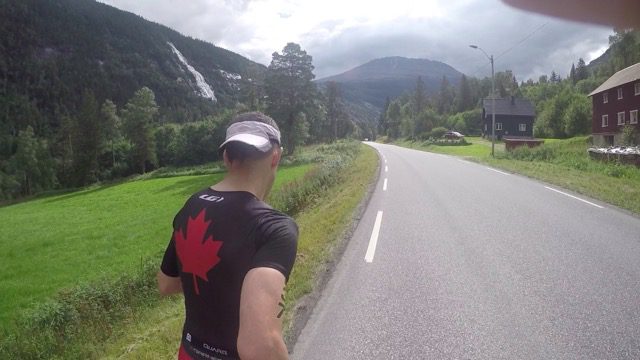 Richard Hayden had the chance to compete in his dream race in 2017, when he finally got lucky in the Isklar Norseman Xtreme Triathlon lottery. On a crisp August morning in August, the dentist from Salt Spring Island had just one goal: getting to the top of the Gaustatoppen, an extinct volcano in the south east of Norway. It’s a privilege for only the first 160 out of 250 athletes in the race.

Richard Hayden had already three full distances triathlons – 3.8K swim, 180K bike and 42.2K run -under his belt when he toed the start line of the Norseman Xtreme Triathlon: a race where you have to jump off a ferry into an ice cold fjord and swim back to shore, ride your bike over five mountain tops and run a marathon that ends with a seventeen kilometer climb to the top of the Gaustatopppen, 1880 meters above sea level. It is believed to be one of the toughest Ironman distance triathlons in the world. “I had seen videos of the Norseman Xtreme and it seemed like an interesting race in an interesting place,” Hayden smiles. “It’s so different from a normal Ironman, which can be extremely tough too. This race is not about finishing in a specific time, or a placing in your age group: it’s all about getting up that mountain and earning a black finisher T-shirt at the top.”

Only 250 athletes every year have the chance to participate in the Norseman Xtreme. Race entries are given by lottery and Hayden had entered four years running before being granted a spot. He wanted extreme and he got extreme. “The swim wasn’t too bad and I did handle the cold pretty well”, says Hayden who finished the swim leg in 102nd place. When he’d changed into a dry set of clothes, the Norseman Xtreme got in full swing on the bike.  “Fourty kilometers into the bike portion it really started to pour and I got so cold that I thought I wouldn’t be able to continue. I was at the mercy of rain, cold, wind and hills; the elements took me to tears and almost made me quit. And in the midst of it all, there was the amazing view of the Hardangervidda plateau.”

Thanks to his support team, his wife Janine and his nephew Joel, he kept going. They were his cheerleaders, they supplied him with food, they gave him an extra jacket at the right moment and even climbed to the top with him. “Without them, I couldn’t have done it. They were working their butts off too. If they missed a beat, it meant me missing an even bigger beat.”

His sheer determination and with the help of his support team, he made the cutoff in 75th place.  Only 160 athletes are allowed to finish the race at the top, earning a black finisher T-shirt. For the rest of them, the race ends with an alternate finish. “The ironic part was that getting to that 32K checkpoint and going up this huge mountain, it mentally marked the downhill part of the race for me. I thought that if I made it to the cutoff, I was almost there, but I couldn’t be more wrong.  I didn’t have a lot of energy left – everything that I tried to eat with the exception of a handful of potato chips was making me sick – and the climb was absolutely grueling.  There wasn’t even a path. It was all rocks, boulders, streams, and mud. I asked every person along the way how much further it was, and everyone gave me the same answer, so Janine made me stop asking.”

After more than fifteen hours of hard labour, Hayden made it to the top in 125th place. “Even at 500 meters before the finish line, I wasn’t sure I could do it. With fifteen steps to go, I roared and didn’t believe I could take another step. When I was getting closer to the top, I expected to hear the announcers cheering through the fog-covered peak, but when you get to the top there is no fanfare. They take your timing chip, give you a blanket and a bowl of soup and that’s it. What I realize now is that you don’t need someone to announce or validate the accomplishment. When you get there, everyone just knows and more importantly, you know it. This race was beyond my expectations and lived up to its extreme tag: extreme conditions, extreme emotions. I was taken to the edge of what I could do, and at the end of the day I took a black shirt home!”