Canada’s Lionel Sanders surged onto the professional triathlon scene in 2013 when he took Ironman 70.3 Muskoka by a whopping 6:30 over none other than two-time Kona runner up Andreas Raelert. The following year he would take his first Ironman title in Florida, and a year after that would really come into his own with four 70.3 titles and a big win at Ironman Arizona.

While Sanders has yet to win the Ironman World Championship, he has finished second twice – in Kona in 2017 and earlier this month in St. George.  Even though his only world title is the World Triathlon Long Distance Championship he took in Penticton in 2017, Sanders is one of the most popular figures in our sport. Here’s why:

He finishes second a lot (yes, we know he wins a lot, too)

For those of you old enough to remember, one of Golf’s biggest rivalries of all time was that between Arnold Palmer and Jack Nicklaus. Nicklaus won more tournaments and majors (73 PGA titles and 18 majors to Palmer’s 62 and seven), but while Nicklaus was always considered the sport’s greatest player (at the time), Palmer was the most popular. “Jack had the trophies that Arnold wanted, but Jack didn’t have the love of the fans that Arnold had,” Ian O’Connor, the author of Arnie and Jack told golfchannel.com.

Sanders has won a lot – he’s won 27 half-distance races over the years, along with four full-distance titles – but he hasn’t had anywhere near the same success at the sport’s major titles. It could be argued he’s actually become much more popular after a number of defeats, too. Last year he started a tear of runner-up finishes that have engendered him to triathlon fans everywhere. After a melt down at Ironman Coeur d’Alene, he bounced back to finish second to Jan Frodeno at the Tri Battle Royale (yes, we know there were only two athletes in the race, but he still did a PB with a 7:43 finish), second to Cam Wurf at Ironman Copenhagen, second to Joe Skipper at Ironman Chattanooga and then second again to Gustav Iden at Ironman Florida. This year there was the miraculous come from behind runner-up finish at Ironman 70.3 Oceanside and then that St. George finish.

After all that, fans can’t help but wish the guy could finally take a big win. 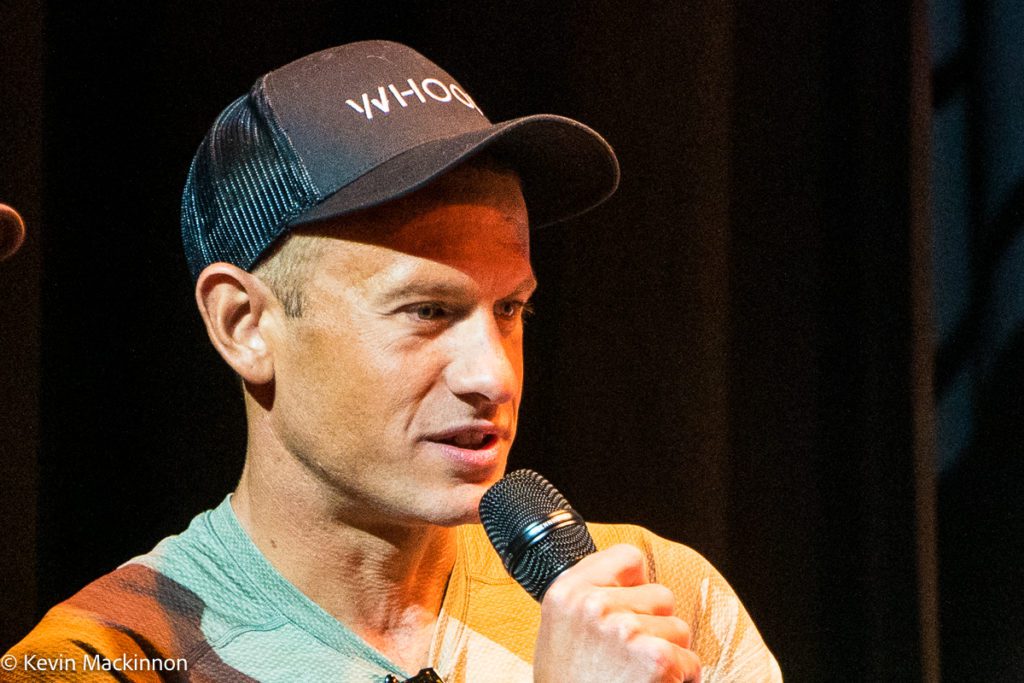 With 145,000 subscribers, Sanders’ YouTube channel, which is produced by Talbot Cox, routinely pumps out videos that often garner over 100,000 views. His post-race recaps are traditionally straight from the cuff and he has no qualms criticizing himself. The popularity of the videos no-doubt helps him keep his sponsors happy, too.

He makes mistakes … but owns up to them

Over the years Sanders has done some questionable things. At his first race in Kona he competed with a Camelback filled with water, which negated many of the aerodynamic benefits he could have enjoyed on the bike. A few weeks after his runner-up finish in Kona, he fired his then coach David Tilbury-Davis. Sanders would rehire Tilbury-Davis a year or so later as an advisor.

Sanders is the first to admit that he finds it difficult not to push himself to the limit in training and racing, and that he can be, to use his own word, “stubborn,” and has to learn things the hard way.

“I am one of those people who needs to learn and have it hammered into me many times … I don’t know why I don’t learn,” he said. “I need to make a ton of mistakes. I’m fighting against myself and my desire to destroy myself early on.”

“Extremes is my thing, but I am starting to understand my personality after doing this for 12 years and I am putting safety valves in place to ensure my tendencies don’t come out,” he said.

Related: There’s nothing to be nervous about

Whether he wins or loses, he always has lots of praise for his competitors after a race. He recently helped raise money and awareness for the Challenged Athletes Foundation (CAF) through his participation in the Professional Triathletes Organisation’s Pro Am race that was part of the Herbalife24 Triathlon Los Angeles, too.

“The importance of this relay was to highlight the many CAF athletes who embody the true meaning of #nolimits,” he said after the race.

Over the years Sanders has been involved in some of the most exciting races the sport has seen. Whether it be his epic duels with Sebastian Kienle at the Championship, the sprint to the finish at the Ironman 70.3 North American Championship in St. George last May, his sprint to a runner-up finish at Ironman 70.3 Oceanside in April and then again in St. George last month where he passed Braden Currie in the final few hundred metres to finish second in St. George.

While those sprints to the line are exciting, Sanders’ biggest struggles don’t always make sense, but have earned him respect. In Coeur d’Alene last year Sanders went from looking like he was in contention for the win to being forced to walk much of the last 30 km of the marathon. He’s also struggled to get to the finish in Kona on numerous occasions.

“No limits,” the slogan Lionel Sanders promotes, always sounds good, until you push yourself beyond that very point. When you’re walking the last half of the run at an Ironman event and you’re as famous as Sanders is, you hear more than a few “no limits” comments.

“People make fun of me when I’m walking,” Sanders said during the press conference in St. George. Two-time Olympic gold medalist Alistair Brownlee said that he walked a lot of the marathon alongside Sanders in Kona a few years ago – he found hearing the athletes make fun of Sanders made the ordeal a bit more “entertaining.”