The challenges Amelie Kretz endured to earn a spot at the Olympics in Tokyo this year were nothing short of incredible. She managed a three-continent, four-country, four-race journey to eventually earn Canada a second women’s spot for Tokyo, and, despite Triathlon Canada seemingly giving up on the mixed team relay earlier in the year, got Canada a spot in that race, too.

Did Triathlon Canada give up on an Olympic relay team? Amelie Kretz says yes

As you can read in the link above, initially Canada had looked to qualify two women for the Games in Tokyo through a spot in the mixed relay, but when that fell through the only way Kretz could return to the Olympics would be if she could move herself high enough in the rankings to earn Canada a second individual spot, and then be picked by Triathlon Canada for the team.

After a stellar swim at the first WTCS race in Yokohama, Kretz found herself in the chase pack off the bike alongside countrywoman Joanna Brown, and surged into fourth place in the first few kilometres of the run. While Brown put together a solid run despite a budding kidney infection and a broken nose and would run her way to 13th, Kretz would struggle through the latter stages of the run to finish 33rd.

A week later, though, Kretz pulled through with an incredible race in Portugal. The Ste-Therese, Que., native finished sixth, moving her up to the 53rd spot in the Olympic ranking, enough to give Canada a second women’s spot in Tokyo, and also give Canada a chance to compete in the inaugural Mixed Team Relay at the Games.

Kretz rounded out her Olympic run with a 21st-place finish at WTCS Leeds and a fifth-place finish at the World Triathlon Cup Huatulco, which was enough to solidify her ranking heading into Tokyo. 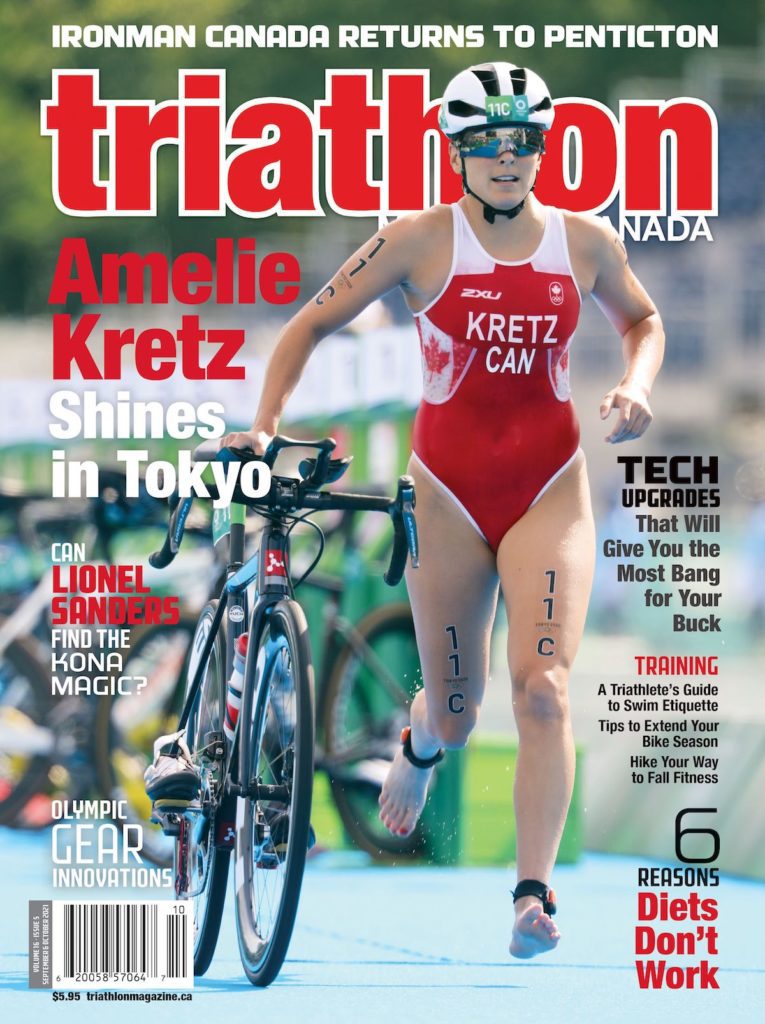 To say the Olympics was a tough ride for Canada would be an understatement. We were hardly alone on that front, either. Australian athletes, who also struggled with lockdowns and an inability to race for much of the year before the Olympics, didn’t have the races many expected they were capable of in Tokyo, either.

An Achilles tendon injury appears to have hampered Tyler Mislawchuk’s race – after possibly the best swim of his career, he came off the bike in a perfect position, but was unable to pull out the run we know he is capable of.

Throughout the Olympic run up, Brown basically wasn’t able to catch any sort of break. She endured everything from that broken nose sustained while warming up in Yokohama to a kidney infection that left her hospitalized in Portugal. In Tokyo she had not one, but two, flat tires during the individual race in Tokyo.

As tough as it was for Brown and Mislawchuk, for Kretz the Olympics provided even more proof of just how gutsy an athlete she is. Like Mislawchuk she finished 15th, an impressive performance and a big improvement on her 34th in Rio. While he’s obviously a bit biased, her coach Alex Sereno wasn’t surprised to see Kretz pull through in Tokyo.

“Amelie is a legend,” Sereno says. “What she did to get our second spot, well it reflects on how she is an amazing world-class athlete.”

While she didn’t get a chance to really show her talent at her “home-town” race in Montreal in August due to an injury that forced our out of the WTCS racing there, there’s no denying that Kretz deserves the honour as our top Olympic-distance elite athlete of 2021.

Kretz is all-too-aware of the support that made her Olympic performance possible. Knowing they wouldn’t be allowed to travel to Japan, heading into the Games her parents and Sereno joined her in Boulder to provide much needed support.

“This road was bumpy to say the least, but the support of my incredible team made it easy for me to keep pushing through all the rough times,” she says. “Thank you to everyone in my corner!”

Here at Triathlon Magazine Canada we’re very much in that corner, too.