When it comes to fueling needs for training and racing, professional cycling teams can’t mess around. They need the products to allow them to train and race at their best, while being absolutely certain the products don’t contain any banned substances. For a number of the sport’s top World Tour Teams including Bike Exchange, Astana, AG2R and Cofidis, the nutritional supplements they trust and use are from Italy’s Named Sport.

While Canadians might not be familiar with Named (pronounced nah-med as it is an acronym for Natural Medicine), endurance athletes in Europe are all-too-familiar with the Italian company’s products. Only established in 2014 when founder Andrea Rosso formed a partnership with one of Italy’s leading natural medicine companies, Named S.P.A, the company has quickly become a major player in the sports-nutrition marketplace, especially with elite cyclists. In addition to its sponsorship of many pro teams, Named Sport is an official sponsor of all three major Grand Tours – the Tour de France, the Giro d’Italia and the Vuelta.

The original concept of Named was to utilize the research and knowledge that Named S.P.A had acquired in over 30 years of developing natural remedies in a variety of different therapeutic areas and bring that knowledge to the world of sports supplements. First and foremost came the desire to make the products as natural as possible and to utilize the purest ingredients available. That’s especially important to elite athletes, who must always ensure that anything they’re taking in doesn’t contain any banned substances. Named Sport was the first Italian company to obtain the Informed-Sport certification for its HydraFit drink and continues to commit to obtaining that certification for all its products. The company has also received 5 Star International Fish Oil Standards (IFOS) for its Omega 3 supplements as well.

All of which gives pro cyclists the confidence that the Named Sport products won’t get them into trouble, but endurance athletes also need to have faith that the products they use will help them perform better both in training and racing. In addition to their own research done in the lab, Named Sport’s partnerships with elite teams and athletes have helped them develop products that have become extremely popular with pros and enthusiasts alike. While the sponsorship of many pro cycling events has been a key component to the company’s growth, they’ve seen a huge uptake from endurance athletes in Europe who have been introduced to the product through their work with a number of Gran Fondo events.

Since the Named Products are only arriving in Canada this month, we haven’t had a lot of time to test them out, but our initial trial runs have left us impressed. The HydraFit powder is easy to prepare and is both tasty and easy to digest, offering some much needed, easily digested energy on even the hottest days. There’s also considerably more sodium than you’ll find in other sport drinks, which is especially important for long efforts in hot, humid conditions – you know, like summer in Canada. The same goes for the Sport Gels, which are very easy to get down, too. We were especially impressed by the Isonam Energy Powder, which offers a real energy boost during a workout session, while also remaining extremely easy on the gut. All the Named Sport products have been very easy to digest, even during intense efforts in hot conditions where one might often run into stomach issues.

The initial run of Named Sport products don’t just include the company’s training products – there’s also the 4 Fuel Recharge, which is another product that’s easy to get down and can aid with recovery after a tough training session.

So now Canadian cyclists won’t just have to wonder what they’re seeing the riders in the Tour eating and drinking – this summer they’ll have a chance to try the Named Sport products out, too.

Named Sport products available in Canada in 2021 (Check for availability at your local bike shop):

Pre- and During products 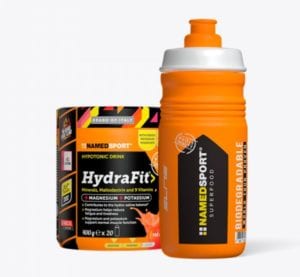 Thanks to a mix of magnesium, potassium and nine vitamins that combine for an electrolytic hypotonic solution, HydraFit is a great way to hydrate and replace salts lost due to heavy sweating during intense physical activity. It’s easy to get down thanks to the refreshing flavour. You’ll get 1180 mg of Sodium, 442 mg of Calcium, 500 mg of Potassium and 241 mg of Magnesium in each 100 g. 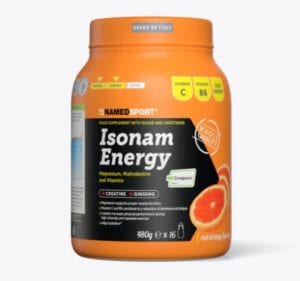 Isonam Energy uses a special blend of carbohydrates (maltodextrins and dextrose 6%) which are absorbed by the body at different speeds. Thanks to its osmotic pressure identical to that of plasma, which ensures rapid gastric absorption and rapid assimilation in the intestine. You get 827 mg of Sodium, 487 mg of Potassium, 200 mg of Magnesium, 267 mg of Vitamin C, 4.7 mg of Vitamin B6, 10 g of Creatine and 100 mg of Ginseng d.e. in each 100 g. 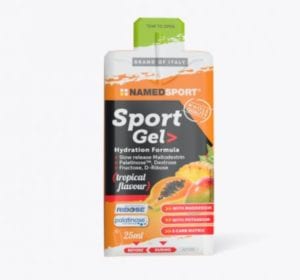 Using five different carbohydrates that are absorbed at different rates, you get a gradual, constant supply of energy with these fat-free gels. They are available in a variety of different formulas: Pure Energy, Glucogenetic, Caffeine and Hydration. You get 68.9 g of carbohydrate and .27 g of salt per 100 ml. 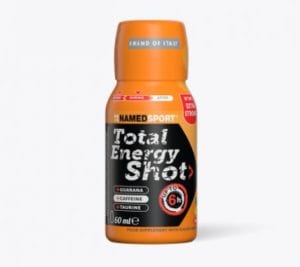 This liquid energy shot has caffeine, guarana and taurine (one of the main ingredients in Red Bull), along with elderberry extract and vitamins C and B12. It’s designed to give you a big boost of energy at a pivotal part of a race or training session. Each 60 ml flask has 130 mg of Caffein, 100  mg of Tuarine, and 100 mg of Guarana. 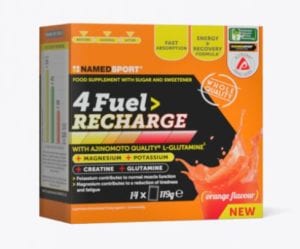 Thanks to the formulation that includes potassium, magnesium, creatine and glutamine, you’ll quickly rehydrate after a tough session, while also reduce tiredness and fatigue. Each packet contains 200 mg of Magnesium, 250 mg of Potassium, 1,500 mg of Creatine and 500 mg of Glutamine.