Summer races have arrived so let’s review some key points to follow to avoid problems in the heat. Here are our top five tips to avoid dehydration during a race.

Trying out a new sports drink for the first time during a race is a bad move. Many triathletes race goals have been severely altered by the stomach issues from trying out an unfamiliar product during their big race. Train with what’s provided on course if you plan on using it on race day!

Aim for 400 to 800 ml of fluid per hour consistently during the bike and run segments. Taking in huge quantities all at once while in race mode will probably not work. Research shows that it takes 40 to 60 minutes for the fluids to be fully absorbed during exercise so if you fall behind on fluid consumption, it may be too late. Have a race nutrition plan that involves consistent fluid consumption throughout the race effort.

Be realistic. A personal best is probably not going to happen on a scorcher day so play it smart. Going fast at the start of a race can accelerate dehydration and make for a long, uncomfortable race. Don’t do it! 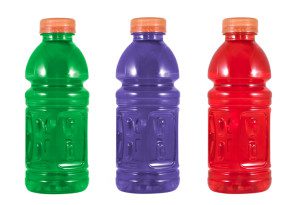 Athletes only hydrating with water can dilute their electrolyte stores and develop hyponatremia. Aim for at least 450 mg of sodium per hour to combat the decline of plasma sodium concentration normally experienced during prolonged exercise. Electrolyte sports drinks with sodium have been also been found to help endurance athletes retain water in their system.

Taking in sugars up to 2 hours after finishing a race can enhance muscle glycogen restoration. If ingested as a fluid, this process can be accelerated as fluid is absorbed faster. Your urine color can tell you how well your hydration plan is working. Dark yellow is a sign of under-hydration. Light yellow to clear is what to aim for.