If there’s one thing runners and triathletes love at least as much as training, it’s beer. After a long, hot workout, there’s nothing better than a cold brew to cool you down. Despite its popularity, not much has been done to review its effects on recovery and exercise performance, so a few researchers decided to look into the existing literature and answer the question once and for all.

To do this, the team reviewed 16 studies looking at the effects of beer on exercise performance and compiled that data into one systematic review. They found that beer can actually be a decent post-run beverage, as long as you’re careful about it. First, they determined that low-alcohol beer (less than four per cent) was more effective at helping athletes rehydrate after exercise than higher-alcohol beers. If you choose to drink a beer that’s more than four per cent alcohol, they recommend pairing it with a non-alcoholic option to prevent diuresis (a.k.a. having to go to the bathroom a lot).

The researchers also noted that beer is rich in polyphenols, which, they say, could be an effective strategy for preventing respiratory infections during heavy training. The alcohol content, however, could have some negative effects, so it should be consumed in moderation. Based on the studies they reviewed, the researchers also found that moderate consumption of beer as a post-exercise beverage did not seem to have an effect on the body composition or strength qualities of the runners studied.

Finally, the authors note that mixed results in the studies they examined make it difficult for them to make any sweeping conclusions, primarily because of variations in study design. They note that future studies should include more women, and should use more valid and consistent protocols. 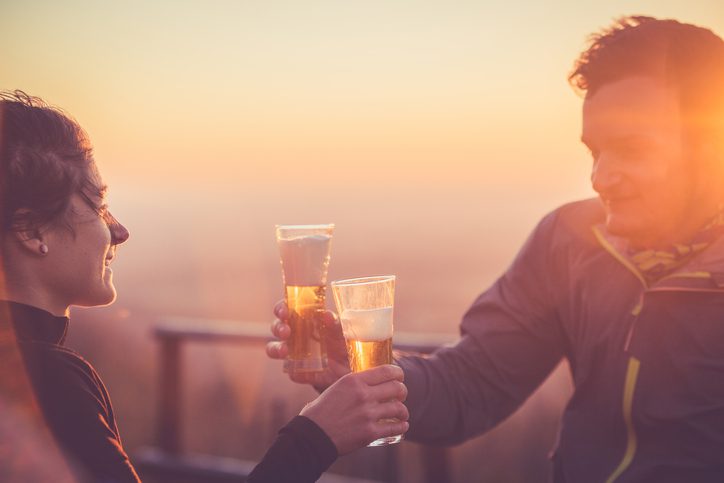 If we were to give beer a score from 1 to 10 based on its rehydration potential, we’d probably give it a five or six, because while it does contain carbohydrates and polyphenols that help aid recovery, it also has alcohol, which doesn’t do you much good. According to the researchers, non-alcoholic beer is a pretty good option for post-run hydration, and you can make it even more effective if you sprinkle in a little salt. They do admit, however, that adding salt may make your beer less palatable, which sort of beats the purpose of a post-run celebration.

So if you enjoy the occasional beer after a run, keep doing what you’re doing. Just remember that beer doesn’t replace water, so be sure to have glass of H2O alongside your favourite brew. If you’re not a big fan of beer, don’t worry — you’re not missing out on some performance-enhancing elixir…you can just stick to water.