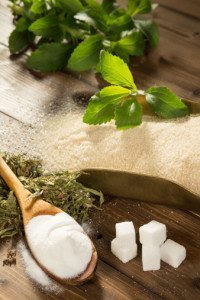 Stevia, the sugar alternative derived from the plant stevia rebaudiana, has recently burst on to the natural food scene. Many people looking to cut down their sugar intake have switched to using stevia as a sweetener. But this “natural” food may not be as pure as it sounds.

Stevia leaves and extracts are sold in health food stores, but have not been approved as safe food additives in Canada and the United States. If you’re wondering how it is you can find stevia on the shelves of your local grocery store, keep in mind that those options, such as PureVia and Truvia, are highly purified stevia extracts. These purified extracts have been labelled by the US Food and Drug Administration as “generally safe for consumption.” While the stevia leaf is approximately 30 times sweeter than regular sugar, the purified extract is around 300 times sweeter than regular sugar. Stevia is so potent a single tablespoon is used as the equivalent to an entire cup of sugar in recipes.

Regular sugar (sucrose) is derived from sugar cane or sugar beets and contains no nutrients. One teaspoon of sugar contains around 15 calories. That may not sound like very much, but the over-consumption of sugar has been increasingly linked with various diseases, including Type 2 diabetes, IBS, cancer and is known to cause cavities.

Stevia is a zero-calorie sweetener option. But touting the packets available in grocery stores as a more natural choice than plain old sugar may be problematic. Truvia is a part of the Coca-Cola family and goes through roughly 40 steps of processing in order to produce the extract. These processes include several chemicals. Similarly, PureVia is owned by Pepsi Co.

Another brand, called “stevia in the raw,” has dextrose listed as the first ingredient, implying that clearly it isn’t just “stevia in the raw.” Check the ingredient list to see whether it is truly only stevia you’re buying. Or, if you’re ambitious, you can buy your own stevia plant and dry and grind the leaves to create your own pure stevia.

Some nutritionists have doubts about the body’s ability to handle zero-calorie sweeteners. When consuming stevia, the body senses that it has eaten something sweet and prepares itself by clearing glucose from the bloodstream. When no glucose is provided from the sweetness, the body has to send surges of adrenaline and cortisol to mobilize sugar from sources such as liver and muscle glycogen. This means that some people experience blood sugar drops from stevia (though it does not uniformly affect everyone the same).

If you ask a nutritionist, they are likely to respond that your best option is to try and wean yourself off of adding sugar to everything. Stop pouring it in your coffee, opt for cereal with a lower sugar value and use fresh fruit to quench cravings for sweetness.