Most runners and triathletes love chocolate in any form: candy bars, chocolate chip cookies, squares of dark chocolate. Over 60 per cent of all US candy sales are chocolate-based. But how good—or bad—is chocolate for our health? Is it as health-promoting as we want it to be? What about all the sugar and caffeine that comes with the chocolate? Is dark chocolate a far better choice than milk chocolate? Below are answers regarding chocolate and your sports diet.

Chocolate is made from the fruit of cacao trees. Like all fruit, the cacao bean is a rich source of health-protective phytochemicals (flavonoids) that are antioxidants and fight inflammation. Roasted beans are used to create cocoa. Two tablespoons of natural cocoa powder (the amount in one cup of homemade hot cocoa) offer the antioxidant power of 3/4 cup blueberries. Impressive!

Unfortunately, dark chocolate has a bitter taste, and many runners prefer milk chocolate; it’s sweeter. That said, epidemiological surveys of large groups of people indicate those who regularly enjoy chocolate of any kind consume more flavonoids than non-chocolate eaters. This reduces their risk of heart disease. For example, in the Netherlands, elderly men who routinely ate chocolate-containing products had a 50 per cent reduced risk of dying from heart disease (1).

Related: From A to Z – 26 facts about sports nutrition

Shouldn’t we stay away from sugary foods, like chocolate?

The US Dietary Guidelines recommend a limit of 10 per cent of calories from refined sugar per day. For most athletes, that’s at least 200 to 300 calories of carbohydrate (sugar) to fuel muscles. The better question is: What nutrients accompany the sugar? For example, “sugary” chocolate milk comes with high quality protein, calcium, vitamin D, riboflavin and other life-sustaining nutrients. When used as a recovery fluid, it is far healthier than a sports drink, which is just sugar, water and a dash of salt.

What about sugar spikes…?

Chocolate has a high fat content. Fat slows the rate sugar enters the blood stream and thus reduces the risk of sugar spikes. The Glycemic Index ranks from 0 to 100 the blood glucose response after consumption of 200 calories (50 grams) of carbohydrate (sugar, starch). Gatorade ranks high on the Glycemic Index (78), M&Ms rank lower (33), and dark chocolate ranks even lower (23). Given most of us—well, some of us—don’t eat 200 calories of sugar from just one food at one time, a preferable ranking is the Glycemic Load, based on a standard serving of the food. For example, the Glycemic Load of a standard serving (8-ounces) of Gatorade is 12, chocolate milk is 3.5 and an ounce of M&Ms is 3. 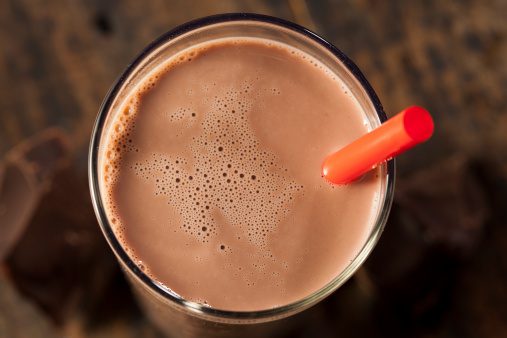 What about chocolate milk for post-exercise recovery?

Chocolate milk can be an enjoyable and nourishing treat that boosts intake of nutrients important for runners. It has a low glycemic effect and is unlikely to contribute to sugar spikes. Drinking chocolate milk after a long run or hard track workout effectively refuels and repairs your muscles, boosts your blood sugar and replaces electrolytes lost in sweat. It’s a nutritionally preferable choice to a carb-only, sugar-based sports drink (2). And it is yummy chocolate—with purpose and meaning, no guilt!!!

How much caffeine is in chocolate?

Like any food that is eaten in excess, chocolate can be fattening. That said, data from 13,626 adults (>20 years old, nondiabetic) suggests chocolate consumption was not associated with obesity.

Is there a best time of the day to eat chocolate?

If you are destined to eat a treat, such as chocolate cake, enjoy it earlier in the day, as opposed to indulging at 8:00 p.m. when you are tired and lack the mental energy needed to stop yourself from over-indulging. If you are going to eat the chocolate eventually, why not enjoy it sooner than later?

Believe it or not, eating chocolate cake with breakfast might actually help dieters reach their weight loss goal. Research (3) with 193 adults on a reducing diet suggests those who had cake with breakfast had fewer cravings for carbohydrates and sweets later in the day. By front-loading their calories, they were less hungry and less likely to stray from their diet plan. They ate either a 300-calorie low carb breakfast or a 600-calorie breakfast that included protein plus chocolate cake (or another dessert).

In the first 16 weeks, both groups lost an average of 33 pounds per person. But in the second half of the study, the no-cake group had poor compliance and regained an average of 22 pounds per person while the cake-eaters continued to lose another 15 pounds each. By 32-weeks, the cake eaters had lost about 40 pounds more than their peers. Seems like chocolate makes for a more sustainable diet?

By no means is chocolate the key to a healthy sports diet, nor is eating lots of dark chocolate preferable to snacking on apples and bananas. It’s no secret: chocolate contains primarily nutrient-poor calories from sugar and fat. A Hershey’s Bar (43 g) has 220 calories—of which about 40 per cent are from 21 grams of added sugar and about 55 per cent of calories from fat. Hence, you want to enjoy chocolate in moderation, so it does not crowd-out other nutrient-dense foods. But even if you are a weight-conscious, health-conscious runner, you can balance chocolate into your overall wholesome sports diet—and add a taste of pleasure to your day.

Nancy Clark MS RD CSSD counsels both fitness exercisers and competitive athletes in the Boston-area (Newton; 617-795-1875). Her best-selling Sports Nutrition Guidebook is a popular resource, as is her online workshop. Visit NancyClarkRD.com for info.