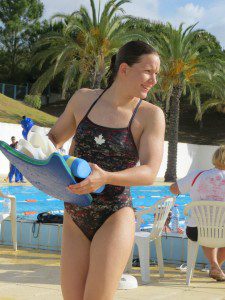 While Team Canada is making us proud in Sochi, our country’s only Olympic open water 10km swimmer is still hard at work in the pool and the weight room.  Toronto-based, Hungarian-born Zsofi Balazs is the first Canadian woman to gain a spot in the Olympic marathon swimming race since the event appeared in 2008. In 2011, Balazs finished in the top-10 at the Pan American Games and was fourth there in 2007 in the 200m butterfly. Balazs won the national championship in open water from 2006 to 2009 and scored her first pool national title in 2010. In her Olympic debut, Balazs competed as a 22-year-old and finished in 18th place and she was 19th in the 10 km at World Championships in Barcelona in 2013 where a super tight race saw mere seconds separate her and 18 other girls from first. But, her prowess in the pool and open water has been hard fought.

She’s bubbly, gregarious, incredibly down to earth and yet she could take people three times her size in an arm wrestle. Despite being only five-foot-five-inches, Balazs has a massive presence. For those of us triathletes who think swimming 3.8km of an Ironman is one crazy long swim, the 10 km open water swimming event might seem unfathomable.

At the London Olympics, Balazs battled the banging and hitting and punching of other swimmers as they hammered it out for roughly two hours in the Serpentine in Hyde Park, stopping only once at a feeding station to be given a bottle of Gatorade, protein powder, caffeine and Advil by her coach Linda Keifer. In that swim, Balazs realized a life-long dream to be an Olympian. 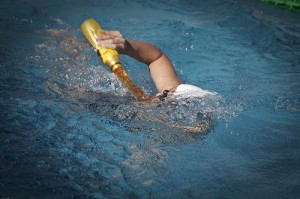 Her family has always believed in her ability, funding her training and racing throughout her childhood despite modest means. Just two days after their move from Hungary, her parents took Balazs from the Scarborough motel room they were calling home to the University of Toronto pool to train. As too often happens when people immigrate, Balazs’s father and mother were not able to find jobs in their fields. Although her father was a software developer in Hungary, during his first years in Canada he worked painstakingly at various construction and assembly-line jobs to make ends meet. Her mother was a midwife in Hungary, but needed to go back to school and get certified in Canada, making for one less income in the family while she did so. But, like their daughter in swimming, they have endured and Balazs is just as proud of them as they are of her.

Her family insisted she did not get a job and focus instead on swimming and school. “There were times we had to go to the food bank—we just didn’t have enough money. My mother hated doing that. I carried a lot guilt for using money for gear and training.” In an interview with the Toronto Star last year, Balazs’s coach marveled at the swimmer’s drive and responsibility. When Balazs began receiving $900 a month in government athletic funding, she used the money to contribute to her family’s funds. “Some of the kids that get carding money, they spend it on bikes and stereos and TVs. She was giving some of it to her family so they could eat,” says Kiefer. “It weighed on her all the time. When she was at the nationals…[s]he was competing to get money so she could help support her family. It was a lot of pressure.” 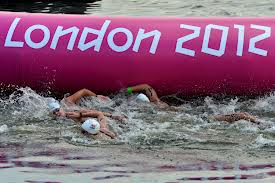 Like many triathletes, Balazs doesn’t love the frantic churn of legs and arms at a race start.  After suffering a concussion in 2009 when a teammate accidently jumped on her in the pool, she was out for almost six months. When she returned to the water she did so with an increased fear of open water swim starts but has since worked with a sports psychologist to overcome that. 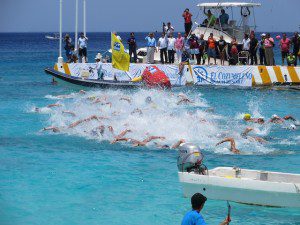 “There’s nothing calming about hundreds of people just closing in on you–you can just feel the water sucking you in and under,” says the Olympian. “No matter how many races I have done the start and first turn still make me anxious.  What I do is just get out to the front as fast as I can and stay there until the pack settles down a bit and until I can calm down too, then I settle back into the pack so I am not the only one doing all the work. It is also a good idea to do head up swim for the first bit to avoid the heels and feet on the start up kicks of other swimmers,” she insists.

Balazs describes her lead up to the London Olympics as particularly intense because she decided to switch coaches to get there, walking into Keifer’s office in January of 2012 saying, “I want to do this together. You say ‘jump,’ I’ll say ‘how high?’ and from that point on, Linda and I were just like a well-oiled machine.” It paid off particularly for the 10 km FINA Olympic marathon swimming qualifier that June in Portugal, where Balazs finished sixth in a deep field.

Up next for the Olympian is the Pan Pacific Championships this summer in Australia and the Pan AM Games in Toronto in 2015. While she covets a spot on the Olympic team for Rio in 2016, she hopes too to make the police force, so some of her longer term race plans are tentative. One thing is for sure, if there’s anyone I’d want to be protecting me it’d be Balazs—with her endurance from swimming, her big heart, her strength and mental tenacity, she’ll make a damn fine cop.