This coming weekend marks the 19th edition of the Xterra World Championship which is taking place in Kapalua, Maui. On Sunday October, 26, the world’s best off-road triathletes will battle it out over a 1.5 km rough water swim, a 30.4 km mountain bike and a 9.5-km (5.9 miles) trail run through pineapple fields and forests. The Xterra World Championship race is the last in a series of nearly 100 off-road triathlon races held in 16 countries and over 30 U.S. States. The pros are racing for the world title and $105,000 in prize money. 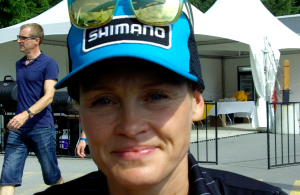 As one of the top off road triathletes in the world for the past 10 years, Canada’s Melanie McQuaid is one to be feared on Sunday. McQuaid became the first person to win three Xterra World Champion titles and was the inaugural winner of the ITU Cross Triathlon World Championship in 2011. If her awe inspiring off road race resume isn’t enough, she’s also become one of the top performers at the 70.3 distance with four Ironman 70.3 wins under her belt and countless podium finishes. McQuaid will be joined on the start line with fellow Canadians Danelle Kabush and Chantell Widney who will no doubt be a powerful presence among the top ranks.

McQuaid spoke to TMC before leaving for Maui:

“I have had a great year where I had some career bests… but I am still very motivated at this point in the season.  I have had some excellent sessions with Kelly Guest’s junior elites, and that has given me a glimpse of the speed and power the ITU athletes  will bring to  the race. I am excited to see how fast the sport is getting and I look forward to being part of the race.”

When asked about her race plan, McQuaid explained, “Having won before I know that my best races were always the ones where I did all the work and then just went and had fun at the race so that is really the main plan.  I am happy to have the best roommate possible in Danelle Kabush, she has the coolest head in the business and makes me laugh, so we should arrive with smiles on race morning.  I get to Maui on Wednesday and will just relax, smell the flowers and go like stink on race day – we’ll see where that stacks up with this year’s competition.”

Forty-one countries will be represented including 50 pro men and 31 pro women. The race starts at 9:00 a.m. on Sunday, October 26 at the beach in front of the The Ritz-Carlton, Kapalua, Maui, HI.