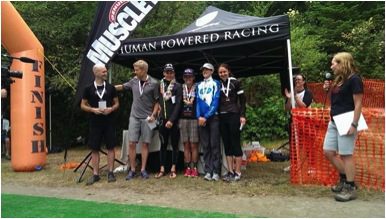 The XTERRA Victoria triathlon represented one of the few Canadian opportunities for age group athletes to punch their ticket to the XTERRA World Championship in October on the island of Maui. For this reason, the Victoria event was certainly not limited to a local field. Athletes from all over Canada and the US rolled into town to see the legendary singletrack in “The Dump” where all of Canada’s best mountain bikers have sharpened their skills. It is no accident that Canada has produced the world’s best national team for mountain biking every year for more than 20 years. The trails in Victoria are an excellent venue for creating mountain bike champions.

The race offered a clinic the Friday before the event where pro athletes including Brent McMahon (Olympian and 70.3 star), Danelle Kabush (Luna Pro Women’s Team) and Melanie McQuaid (Trek Factory Racing) took more than 20 riders out onto the bike course to practice. The pro athletes shared tips on which lines to take, strategy for pacing and how to improve technical skills. The bike course started at the Mt Work Park entrance with a long, steep climb up to Old Payoff and down Harem Scarem to the Switchbacks. The course included sections of fast and flowy singletrack with short technical elements that required some courage, while still remaining approachable for advanced beginner to intermediate athletes. 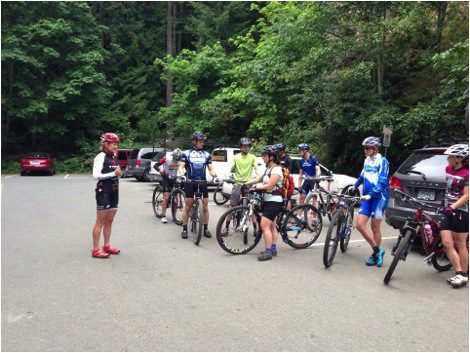 Race day began with some early morning showers which resulted in damp conditions on the trails. The clean, clear waters of Durrance Lake set a pretty backdrop for the race venue with wetsuit temperatures called on race morning. Kate Button recalled her favourite moment from the morning before the race start. “My favourite moment was Brent rolling into transition between Danelle and me in his fancy compression tights. I realize Danelle is wearing loose fitting yoga pants and I’m wearing free ride shorts and say to him…”didn’t you know you’re racing in the baggy-pants triathlon today?” Good thing you’re extra awesome at mountain biking Brent.” 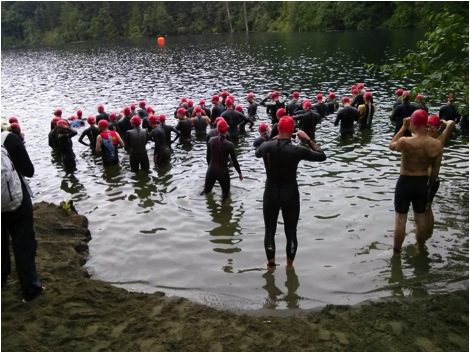 The swim proved to be marked a little short, as the two fastest swimmers, Brent McMahon and Ironman legend Tom Evans, were out of the water in under 13 minutes. Next out was a group that contained pro woman’s competitor Melanie McQuaid at 14:30 followed by her main competition, Kate Button and Danelle Kabush, a further minute back.

McMahon’s race best 1:09 bike split immediately started riding clear of the field while Mat Signoretty posted the second fastest split in hot pursuit. Courtenay-based superfast chiropractors Derek Vinge and Clay Ward were next fastest off the bike, but it was Vinge’s lightning fast run split, only 10 seconds short of McMahon’s race best 41:10, that earned him second place on the day over Ward in third.

Kate Button, a new XTERRA pro, was showing her growing improvement on the bike to come into T2 ahead of Danelle Kabush. However Kabush’s running ability, particularly on very technical and steep terrain, erased her deficit and earned her a strong second place behind McQuaid.

After the race Kabush said: “XTERRA Victoria now ranks as one of my all-time favourite courses, a true off road triathlon starting in a beautiful lake followed by fun, challenging SINGLE TRACK! The bike was technical but the run was even more so! I was excited to see so many competitors out for an exciting day of racing! Nice to see the legend of XTERRA, Mel, back on the dirt showing us how it is done on the home trails and thanks to Katie for pushing me right through to the run!”

The event was championed by the Human Powered Racing triathlon team in Victoria, headed up by Ironman star Mike Neill.   The local Trek Procity store also fielded a team where Troy Woodburn teamed up with Chek News celebrity Erin Glazier.  Glazier was inspired by last year’s event to become a triathlete, and had this to add:  “Racing my first XTERRA as part of a relay team was the best time. The race was very well organized, the course was phenomenal and the people involved were fantastic. From a warm lake swim, to technical single track on the mountain bike (I passed off to my teammate!) finishing with a scenic run on the trails, the experience is truly a triathlon in the woods. And, nowhere else can you put your bike on the rack in transition next to world class pros like Melanie McQuaid and Brent McMahon, while at the same time having the race emceed by former Ironman champ Jasper Blake. Hands down I’ll be back next year!”

Men’s champion McMahon said: “XTERRA Victoria was again a great fun race in the back yard where I spend many hours training. The course was a little slick with just a misting of rain creating a locals advantage. A great turnout and fresh hot dogs made for a great race scene.” 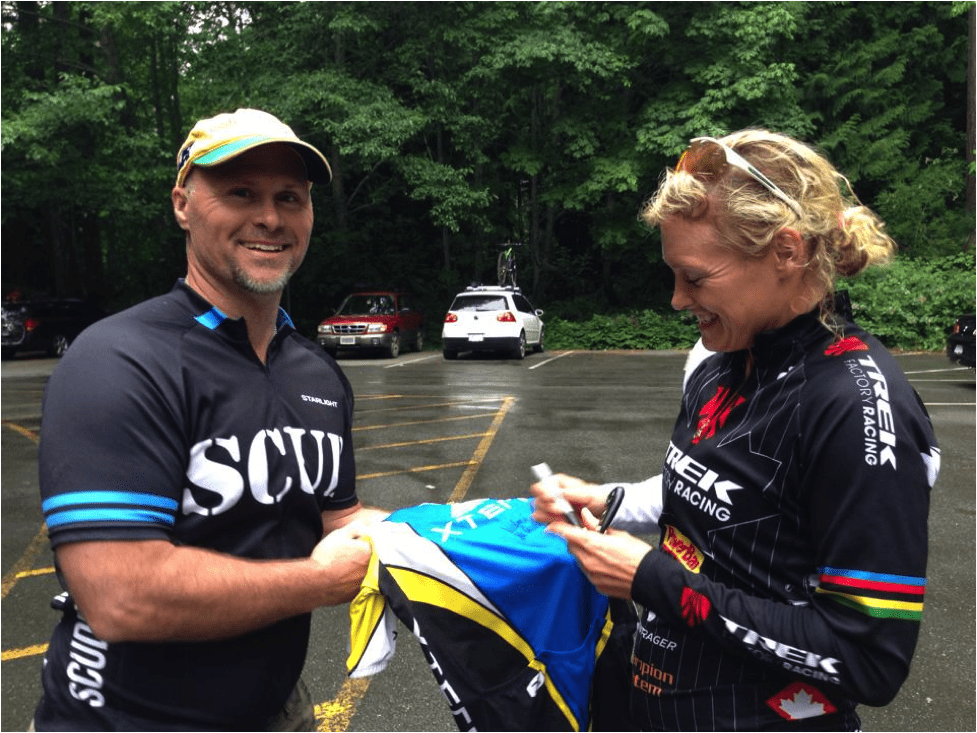