Spain’s Mario Mola continued his winning streak at the Mooloolaba ITU Triathlon World Cup on Saturday. Fresh off his Abu Dhabi win, he ran away with gold taking the sprint distance race in a time of 00:52:54. Mola’s compatriot Vincente Hernandez pushed Mola for the entire race but wasn’t fast enough to catch the world no. 1 in the final hundred metres of the run. 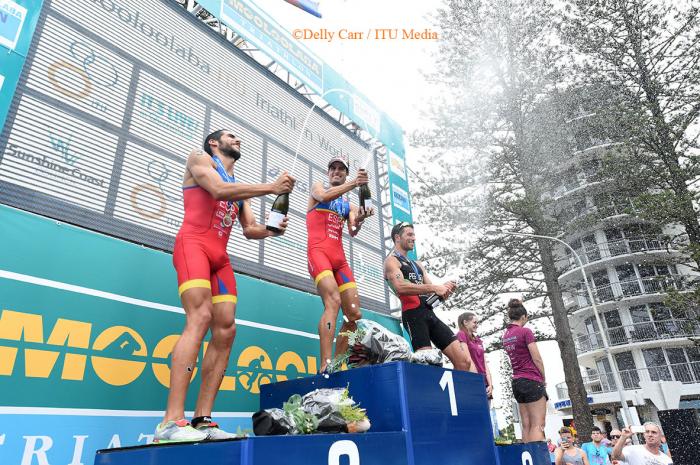 Canada’s Alexis LePage was right at the front pack with Mola on the bike, after a strong swim helped put him in the lead. An unfortunate spill on the bike caused him to drop from the race.

Lepage told TMC, “I made a technical error which caused me a fall after 5 km on the bike. I quickly got back on my bike and remained in the front pack, but unfortunately breaking my rear derailleur kept me from finishing this World Cup. There was lots to learn from this race. The resulting damage was five stitches, a broken frame, a broken rear derailleur and unfortunately my bike computer died as well.”

Michael Lori, who placed 3rd the weekend prior at the OTU Sprint Cup in Wollongong, held on in a tough men’s pack for a 14th place finish. It was a fast final kilometre of the run to secure a top 15 finish, giving Lori one of the top run splits of the day in 15:17.

Canada’s Kyle Jones dropped from the race at T2, saving his energy for the next WTS race in Gold Coast.

Pulled the plug on the run in Mooloolaba. Not quite recovered yet from last weekend. Little more rest and then we prepare for Gold Coast!

Junior development athlete Xavier Grenier-Talavera, hungry for a win after his second place finish last weekend in Clermont, ran away with gold in the Sprint race in 00:52:43. Andrew Yorke finished close behind him in 00:52:49. He will join Jones in Gold Coast next month.

The Canadian women had some strong showings as well in the Sprint race. Dominika Jamnicky had the top Canadian result finishing in 5th in a time of 1:00:30.

She told TMC, “Today was the second hit in the Florida double race CAMTri events (with Clermont last weekend). As always it was a very smooth well organized event and I was lucky to have my parents here cheering me on. Last weekend I was lacking a bit of finesse so today I was looking to change the process of my race. I had a solid swim and made the lead pack. On the bike our pack was split into two and I was part of the break away which eventually got a decent gap. I was happy to finish fifth today.”

Jamnicky heads to Australia next week to get ready for Gold Coast WTS we well. Alex Coates finished in 8th, the only other Canadian female in the top 10.
The second day of the Sarasota CAMTRI event saw North American teams take on Mixed Relay format triathlons. Teams of two men and two women competed in super sprint individual triathlons to form a four-person relay. Each athlete completed a 350 metre swim, 6.4K bike and 1.5K run. An American team of Kaitin Donner (Sprint women’s winner), Erin Jones, Eric Lagerstrom and Jarrod Shoemaker took the win, collectively winning in 1:13:13. Hot on their heels were Canadians Dominika Jamnicky, Andrew Yorke, Laurin Thorne and Xavier Grenier-Talavera. The fastest split of the day belonged to Yorke, finishing his super sprint in 00:16:42.

At the Junior North American Championships, Oliver Blecher of Port Hope, Ontario started his season with a win, finishing the sprint distance race in 00:55:14. He was joined on the podium by fellow canuck, 16-year-old Pavlos Antoniades.

Laurin Thorne won the junior women’s race in 1:01:21, earning herself a career-best finish.

At the Paratriathlon American Championships, Chantal Givens, who we named one of our Elite Paratriathletes of the Year, earned a second place finish in the P4 category. Christine Robbins and her guide Sasha Boulton also claimed a podium spot in the P5 category, taking third.

Just about to board the plane after a great morning of racing. @Beantaggy and I finished 3rd in the Sarasota CAMTRI North American Champs!