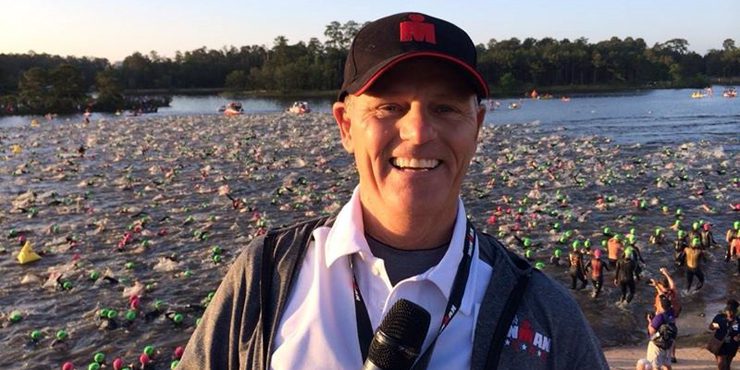 Mike Reilly, the “voice of Ironman”, is one of the most iconic names to the M-dot brand. Since the sport’s early days, Reilly has been congratulating atheltes who cross the finish line by telling them “you are an Ironman,” something that most triathletes would agree is a highlight of the race and many

Reilly was inducted into the Running USA Hall of Champions during its annual conference, recently held in Orlando, Florida.

Getting ready for #RUSA17 Hall of Champion awards, it'll be an eventful night. pic.twitter.com/EnLQlB3ORd

The Running USA Hall of Champions is reserved for individuals who have made a difference in the sport of road running at the highest levels, while continuing to show devotion, vision and commitment to the runners they serve.

He has announced more than 1000 endurance events and has welcomed over 2 million race finishers in a career that has spanned over 30 years. As a pioneer in the sport, Reilly has “defined how races are called and how endurance athletes are celebrated.”

Dave McGillivray, Race Director of the Boston Marathon and himself a 2005 inductee, had the honour of inducting Mike into the Hall of Champions. “Mike Reilly has inspired tens of thousands of endurance athletes to believe in themselves,” said McGillivray. “His illustrious announcing career includes over 1,000 endurance events – among them 160 Ironman triathlons – where he proclaims each finisher’s accomplishment with his iconic phrase, ‘You Are An Ironman!’ Mike’s dedication and impact on the worldwide endurance community is legendary, and is simply unmatched in the industry.”

Mike has overseen the evolution of amateur running and triathlon, since his days of owning retail running shoe stores in the late 1970s. Today Mike Reilly continues in his role as lead announcer at Ironman triathlons worldwide, including the Hawaii Ironman World Championships, and is penning his soon-to-be-released book about inspirational stories from the world’s most famous finish lines. He is a member of the Ironman Hall of Fame and sits on the board of Triathlon Business International (TBI).

Last year, athletes were given the chance to vote on which races they wanted Reilly to announce at in 2017. He will announce at eight of the top 10 voted races, including the Ironman World Championship.