USA Triathlon has named Victoria Brumfield as its new chief executive officer. Brumfield has been the organization’s interim CEO since September after Rocky Harris took on the position as chief of sport for the US Olympic and Paralympic Committee.

“It became clear after a robust global search and rigorous interview process that Victoria is the dynamic leader USA triathlon needs to continue to move forward,” USA Triathlon board of directors chair Joel Rosinbum said. “She possesses all the qualities we looked for in the organization’s next CEO – collaborative, creative, forward-thinking, service-orientated, and passionate about the challenge. With a clear long-term vision for both the organization and the sport, a diverse skillset and unparalleled passion, and a distinct approach for uplifting and empowering our constituents, Victoria is uniquely suited to elevate both USA Triathlon and triathlon and multisport in the United States and deliver on the lofty goals set forth in USA Triathlon’s 2028 Strategic Plan.” 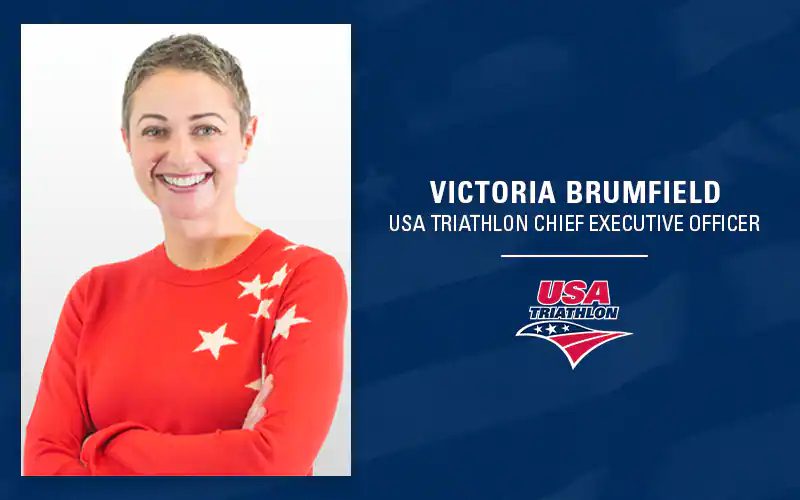 After becoming the first female member of the USA Triathlon executive leadership team, Brumfield now becomes the first female CEO for the organization. Brumfield has worked in the endurance sports industry for almost 20 years. She served as event director for the New York City Triathlon, the Ironman US Championship in New York, and a variety of World Triathlon and USA Triathlon events including the 2003 ITU World Cup in New York City, the 2005 world championships in Hawaii and the 2004 Olympic Trials triathlon. Before joining USA Triathlon four years ago she was a founding member of Virgin Sport.

“I’m honored to lead USA Triathlon during such an important time, and I want to thank Joel, the USA Triathlon Board of Directors and members of the hiring committee for the opportunity,” Brumfield said. “Multisport is transformative, unifying and empowering, and I am proud and ready to wake up every morning and bring this sport and community to more people. I look forward to working closely with our constituents and team to continue to spread the virtues of our sport far and wide, serve our community in a way that enables everyone to prosper, build on the development programs for youth and junior athletes, and celebrate our sport and community every day.”