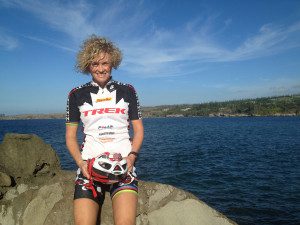 Trek’s Factory Racing Team expands to incorporate a new international triathlon program featuring 15 pro triathletes from Ironman and 70.3 specialists, to short course and U23 athletes. It’s a roster that’s not only deep, versatile, outrageoulsly talented, but it’s also made up of some of the sports best ambassadors. Long-time Trek athlete and multidisciplinary Canadian Melanie McQuaid, is joined by compatriot and (and well-known model) Jenny Fletcher.

Olympic couple Greg (AUS) and Laura Bennett (USA) join the 2014 squad helping the team expand its presence in Olympic distance racing. “The races are getting faster and the margins of victory smaller, said Greg Bennett. “I had to find a brand that would work closely with me and back me a hundred percent. When I looked at all of the options, Trek was the answer.”

Lindsey Corbin (USA), Tim O’Donnell (USA), Julie Dibens (GBR), Joe Gambles (AUS), Matt Lieto (USA), Rebekah Keat (AUS), and Fraser Cartmell (SCO) round out the distance team. “After a fantastic first season riding Trek, I am thrilled to see the development and launch of the Trek Factory Racing Team,” said O’Donnell. “It has been 12 years since an American has won the Ironman World Championships and with the support of Trek Factory Racing, I plan to end that streak!”

A number of young talents represent the development component of the team including Lauren Goss (USA) who has quickly risen through the ranks and has developed a formidable record as one of the fastest Olympic, non-drafting triathletes in the world. At just 21 Ben Kanute (USA) and James Hodge (AUS) are the youngest members of the team. The two-time Junior Elite National Champion and Team USA World Team Championships member, Kanute, will look to learn from his veteran teammates as he pursues success in ITU and Short Course racing in 2014.

All team members will ride the Trek Speed Concept 9 Series and have access to a full arsenal of Bontrager wheels.