I’ll often speak to someone in the triathlon community about bikes and get this sense that their thoughts are fading off. Maybe it’s that thousand yard stare, the feet shifting, or the nodding without verification that they know what I’m talking about. Please note that I am by no means implying that I own the patent on bicycle knowledge. So for those of you not interested in triathlon/cycling history you may want to stop reading. However, its always good to know where all the cool technology comes from.

I truly believe that knowledge does not live in a vacuum. Even true inspiration and thought comes from somewhere. Admittedly I get angry when I go into my local bike shop and there’s this 20-year-old telling me that tubulars are dead.

“Dude, why are you still buying these? No one uses these anymore. Did you know clinchers are getting so much better now and can perform almost as well as a tubular?”

To which I always respond, “If the tubular is the gold standard for clinchers to attain, then why would I not always choose the better performing tire?” Drop the microphone, Thom out. 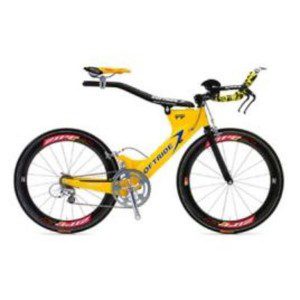 So imagine when I saw T.J. Tollakson roll out this “new” bike called the Dimond. I know that he was very forthright about his use of Zipp’s 2001 frame design.  In fact, there are numerous reports talking about how he rebranded the old design. But the beam design and trend was introduced by Softride.  Remember those? I remember being passed by one during a race and thinking, “I’m not letting that goofy thing pass me.” Putting the hammer down I was able to beat him into T2, only to be passed on the run. Ego is a bitch. Shout out to Brad Arndt .

This brought forth a host of cycling memories. What other designs and technologies have been inspired by the pioneers in our sport?

In the 1990s we saw huge leaps in the aero benefits of using carbon. You could shape and mold the frame to provide significant wind cheating capabilities. If you were watching the Olympics in 1992, you saw Chris Boardman (that’s right, the namesake of Boardman bicycles) break the track record on a Lotus. A monocoque frame design also adopted by Cheetah and Hotta. Both Natascha Badmann and Lori Bowden used Cheetahs. Look to Ventum now. Do you see a difference? Not really.

More recently we’ve heard a lot from Sram’s 1x system that they’ve actually used for many years in the mountain bike world. The idea of using a single chain ring with a traditional cassette has been employed by cycling’s time trial world since the 1960s. I have a print painted by the London, Ontario cyclist Greg Curnoe (who was tragically killed in a cycling accident in 1992) depicting his beautiful 1979 Mariposa time trial bike. It has, like many of the time trial bikes of its era a single chain ring.

Now the coup de grace for the historically illiterate. Did you know that in 1992 Mavic debuted one of the first iterations of electronic shifting. It was called the Z.A.P. The name may have been a clue as to why it failed in the market. It was highly unreliable with countless battery issues. Mavic however, was not the first one to try their hand at electric shifting. In 1990, SunTour developed the BEAST shifting system – Browning Electronic Accushift  Transmission. This is the same Browning family responsible for all those really cool automatic weapons out there (insert dripping sarcasm here). Now this may be the time I notice the thousand yard stare, or the actualization that you’re no longer interested in this. Should I continue? Why not.

When doing a swim/bike brick with our local triathlon club, I noticed someone had a really funny looking disc wheel. Why they were using a disc wheel when training? I don’t know. Upon closer inspection the name on the disc was aerojacket. That’s right, a disc wheel cover. Anyone remember PAWSH disc wheel covers from the late ’80s? I’ll admit that I owned one, that’s until it ripped off during a race. That quickly ended the appeal of using a cover. I’m sure they have come a long way since then.

So why should we care about any of this? For me, I find it hard to swallow that companies are marketing their products as innovative when clearly they are using old designs to make a buck. It’s like a Led Zeppelin tribute band coming out with a greatest hits album. You never had a hit to begin with! If I’m being completely honest, it was the Ventum that pushed me over the edge – and maybe that 20 something bike mechanic.

As triathletes we can often get mired in the concept that our experiences are unique in this sport. I’ve only been racing for 28 years. It wasn’t until I was witness to many great events that I needed to find an appreciation for those who came before me. We pay homage to those when we remember their accomplishments and sacrifices. That includes the tireless work of the engineers who give us these beautiful  bikes.

Guest columnist Thom Burberry is a triathlete from London, Ont.