In May, the window closes for Olympic qualification for Rio. Canada’s top triathletes still have a shot at securing their spot, as the ITU World Cup Series kicks off in a few weeks. For this week’s Throwback Thursday, we take a look back at Paula Findlay‘s stellar 2010 as she heads into an important next couple months trying to make her second Olympic team.

This story originally appeared in the November/December 2010 issue of TMC.

Could there be any doubt? Findlay’s 2010 season not only put her at the top of the Canadian stage as a potential medalist in London in 2012, but it also made the rest of the world take notice.

It’s another of those cold, dark winter mornings in Edmonton and Paula Findlay, her red hair pulled back tightly into a ponytail, is one of the few drivers on the snow-covered road as she heads to her 6 a.m. training session.

Life is pretty much back to normal for the 21-year-old after the summer of 2010 when she exploded into the consciousness of the International Triathlon Union scene with a series of performances that established her as one of the elite females on the circuit. 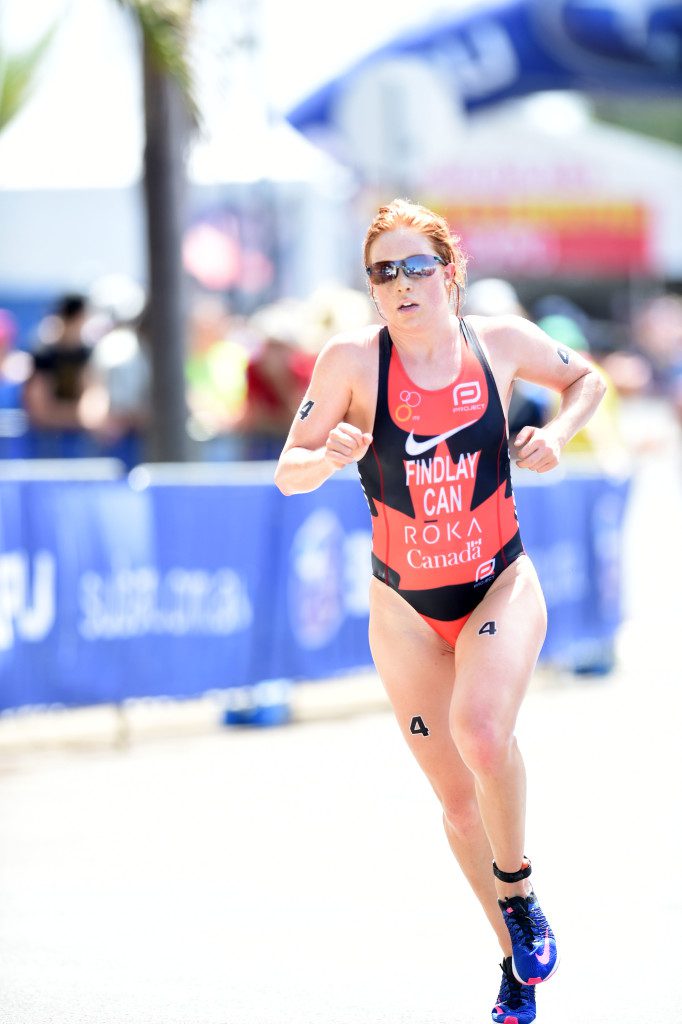 Normal for Findlay means daily 6 a.m. swimming sessions, followed by several hours of classes as she pursues her science degree at the University of Alberta, and then more training. And despite her summer success that included back-to-back victories on the World Championship Series and a fifth-place finish in the overall standings, the petite Edmontonian isn’t a celebrity in her own hometown. Far from it.

“I guess a few people might recognize me,” she says in her quiet, laid-back style. “I try not to link triathlon to school life. It’s nice to keep it separate. My best friends at school are on the swim team and they’re so supportive of my success. But it’s not like I’m a celebrity walking through campus.

“It’s kind of strange getting a lot of attention, being in Budapest (for the WCS final) and getting all this attention from the triathlon world, then going to school and no one knowing. The teachers don’t care. I’m just another kid in the class.

“School is school, triathlon is triathlon. I don’t necessarily want everyone to know about the triathlon side.”

If things go according to plan, that may not be an option in the future.

A bronze medalist at the 2009 Under 23 world championships, the soft-spoken Findlay kicked off her 2010 season with her first World Cup victory in Monterrey, Mexico in April. She stunned the triathlon world by winning her first WCS race in August in London, site of the 2012 Summer Olympics, and three weeks later became the only female winner of  back-to-back WCS races last year by following up with a win at Kitzbuhel. She finished fifth in the WCS Final in Budapest, giving her fifth  place in the overall standings although she had competed in only three events. She earned $18,000 for each of her WCS victories and another $5,300 for her Budapest finish.

“It’s kind of indescribable,” she says of the season. “I went into it not really certain of my goals because I was injured last season (stress fracture in her foot) and I’ve been building from a junior into a senior, and new to the World Cup and racing these international athletes. So I just wanted to get used to that, maybe Top 15 finishes in the WCS races.

“I just kept on surprising myself as I kept racing. It was beyond any of my expectations.”

That success has changed how she’ll prepare for the future. She’ll pass on the winter semester at the university to

focus on training with her goal of the London Olympics clearly within view.

“School is important to me while I’m at school. It is a focus and I want to do well. I’m studying hard, but it is less of a priority right now to get a degree quickly. I want to make sure I can get on the Olympic team. That’s the goal so I have to be 100 percent fully prepared for that competition. I don’t want school to get in the way of that. School will always be there.”

Findlay gets her athletic ability honestly. Her mother, Sheila, was a national team rower in her 20s who also ran track and swam competitively in university. Her dad, a neurosurgeon, took up triathlon last year to make it more of a family affair. Her younger brother is a 250-pound high school football player and her younger sister “is not a competitive person.”

Findlay has always been competitive. It’s one of the reasons she gravitated to triathlon in 2006. She was a competitive swimmer with the highly successful Edmonton Keyano club but discovered, as do so many young swimmers, that she peaked at a very early age. She hit the wall at age 14.

“From that point I hit a plateau, wasn’t getting any faster. When you’re swimming 10 times a week and you go to meets and your times don’t get any faster it’s the most frustrating thing. I would be in tears after almost every race, I just cared so much about it. When you devote your life to it and you’re stuck in one spot, it’s just not fun anymore.”

Findlay ran track in high school, finishing second at nationals in cross-country. With two of the three elements of triathlon already in her bag, the transition seemed natural. She got a bike for Christmas and found a new focus for her athletic competitiveness, an ideal sport for her.

“I guess so. I could still train with the swim club and I loved that, enjoy the people, love the workouts … and it lets me run, which is my strength right now. I don’t love the cycling right now but I’m getting better.”

Part of the reason for the cycling issue is the inability to train outside in Edmonton in the winter. That means hours on the stationary bike, which is mentally much more difficult. With no other real option in Edmonton, she’s spending another winter riding in her basement, and hating it.  That will help make the move to Victoria and the triathlon training centre a little easier.

“I’m not going to be in school for the winter so that makes it a lot easier. Last year I started the (winter) semester and got to a point where it became too much to be going to training camp and studying and I didn’t even stop school until February so that hampered my progress for the start of the season.”

Looking back, she now regrets the Triathlon Canada decision to keep her out of the early WCS races last year and not getting to that circuit until late in the season.

“I didn’t see it as an issue at the beginning of the year. I was not in contention for a world championship, I’m not at that level yet so it doesn’t matter. I’m just doing it for experience. So at that point I was racing the World Cup races, a little less competitive than the WCS.

“It was  a smart decision early on and I could understand the reasoning for it, but at this point I do kind of regret it because just two more races, or maybe even just one with a top 10 finish, would have put me higher up in the standings. That’s a little disappointing but it shows for next year I have to make sure I do five out of seven or seven out of seven. It will change next year for sure.”

For that to happen she has to spend more time in Victoria working on her weakness: the transition and biking. Her strength, naturally, are swimming and running. She was named WCS female runner of the year for 2010 (worth another $5,000)  but argues Australian Emma Snowsill is the best runner on the circuit.

“She’s a step above all of us. I can’t match her right now. I don’t know if I could ever run a 32 minute 10-K, that’s pretty amazing. But that’s the goal we all have to work towards because we know if she’s off the bike (near the front) she’s going to be almost impossible to beat at this point.”

Findlay’s best 10K time is about 33 ½ minutes, and she’s confident she can bring that time down.

“I don’t think I’m at my fastest, just because I only really have one season of training behind me because I was injured the season before. I feel I can improve on it.

“My weakness is technically on the bike. If I’m on my stationary bike I can hold a lot of power. I’m fit on the bike, I’m just not technically comfortable. On a technical course sometimes that can be downfall, especially in Budapest where it was very turny, with lots of corners where it strings out and then you have to get back together. So getting comfortable in big packs is what I have to work on.”

That requires a lot of practice riding in groups, something she didn’t have the opportunity to do in Edmonton.

“I didn’t ride my bike very much to be honest. As soon as I moved to Victoria (for six months last winter) I was doing group rides every day and my skills on the bike improved drastically within just one season. It really is just practice. I’m much better than I was when I started, when I was riding indoors in Edmonton all year, that didn’t help at all.”

Victoria is where she has to be to improve, and she knows that. But she found it to be a somewhat lonely experience last year, missing her friends and family, and she became aware of the sacrifices she’s making to pursue the Olympic goal.

“My family’s a big skiing family, we have a house in Canmore  and I used to ski all the time. It’s something that I really love. Now that I’m training a lot the only time I go to Canmore is at Christmas whereas my dad and brother go almost every other weekend in the winter. We used to go to Jasper a lot. “Now when I do go skiing I’m way more cautious, I can’t break my leg and wreck my season. I miss it a lot. I also used to dance (tap, jazz and ballet) for probably 15 years before I had to stop and put my focus on triathlon. It was a huge part of my life. I knew dancing wouldn’t take me as far as triathlon so had to stop. I miss that a lot too.”