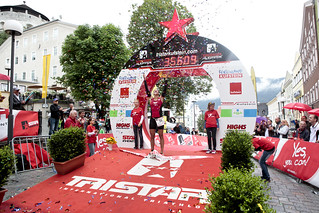 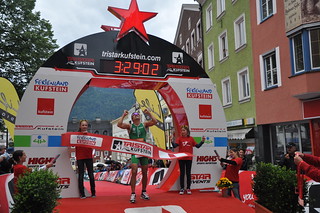 Nearly 350 athletes raced the inaugural edition of the TriStar Kufstein in a rainy but fun day in Ferienland Kufstein, in one of the most stunning landscapes at the Tyrol in Austria. The race has met all expectations  and offered a spectacular performance which has brought hundreds of spectators to the surroundings of the famous Kufstein Fortress, in the city centre.

“I really enjoyed this race! The Hecthsee lake is simply wonderful, I loved swimming there! The weather was a pitty, and it was the only not good thing of the race, because the bike is tough and nice, and the run segment is perfect to compete, due to the city views and because you always know where the other athletes are. I enjoyed TriStar Kufstein and I’m pretty happy of this victory, I had to push a lot at the end to win” said Hellriegel, who finished in 3:28:41. It’s Hellriegel’s second TriStar victory after TriStar Estonia. German Wolfgang Teuchner, who finished in 3:30:36, purchased Hellriegel and got the best bike split time overall, but couldn’t reach him on the run. Austrian Christian Birngruber was third (3:31:09).

Lisa Hütthaler from Austria won her first TriStar race. She was already second in TriStar Cannes and TriStar Salzkammergut. She has taken a solid victory with an impressive cycling performance, leading the race from the start to the end. “I was afraid of the rain, It’s the first time I’ve ever competed with this rainy conditions. It was a very hard race” said Hütthaler, who finished in 3:55:27.

TriStar55.5 Kufstain, which also took place today, offered the same race with the half distance, especially for beginners and fans of short distances. Both winners of the TriStar55.5 competitions are Austrians: Mario Siller won in 1:54:14, and Simone Steinecker got the victory in the female category in 2:04:15. Siller repeats his great performance, he already won TriStar55.5 Salzkammergut