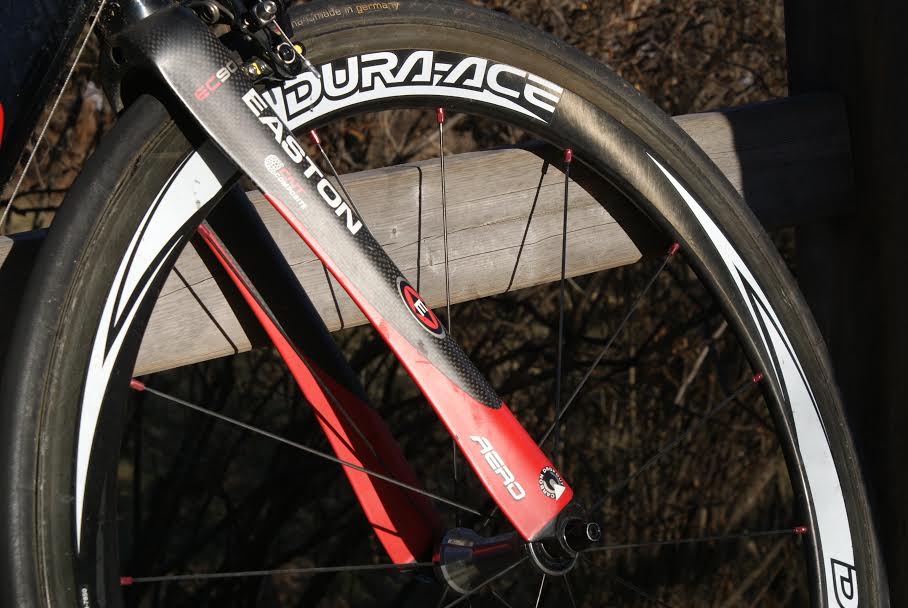 The folks at Shimano dared us to try and break them before the review we published in our November/ December 2007 issue (TMC 2/6), but in eight years of trying we’ve been unable break the set of Shimano Dura Ace C50-CL tubular wheels that arrived in the office to be reviewed.

It’s not for lack of trying. A mainstay on our review bikes for years, the wheels have put in thousands of miles of torture testing, While we had to replace the titanium freehub body on the rear wheel a few years ago, other than a few trips to the trueing stand, the C50s remain one of the fastest wheels in the basement.

The carbon fibre rims were somewhat unique at the time in that there was no aluminum braking surface (there was on the clincher version). At the time the feeling was you couldn’t brake on a fully carbon rim in the rain – Shimano managed to prove that wrong. (This was the wheelset our editor chose to use when he descended Alpe d’Huez on a Ceepo tri frame in the pouring rain – more than a few observers felt they would be peeling him off a cliff face before the bottom of the hill.) The oversized alloy axels combined with the straight and two-cross spoke configurations provide excellent performance and somehow manage to stay remarkably straight, which is even more impressive when you consider there are just 16 spokes per wheel.

Back in 2007 it wasn’t particularly common to see a wheelset that could double as an every day training wheel and then turn into a high-speed racer. The C50 opened our eyes to the possibilities and are still going strong. Shimano’s latest versions of the C50 are a bit wider (to go with the latest aero trends in race wheels) and use a slightly different spoke lacing, all the while retaining the durability and toughness of the ones we tried to break over seven years ago.