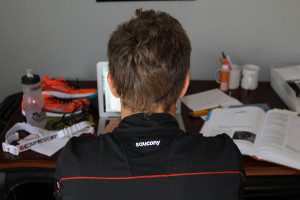 As a student athlete, I’ve had to learn maximize my time. I’ve been balancing high-performance triathlon training and a university workload the whole time I’ve been at McMaster University in Hamilton, Ont. It wasn’t easy and there were some very late nights getting work done, but, now that I’m at the end and about to graduate I can say, it was worth it. For all the student triathletes out there, here are few tips that helped me make it work.

1. Reduce the load
The first tip that I would give anyone aiming at elite competition while in school is to consider taking a reduced course load. Instead of taking five classes each semester, take four or even three. You always have the option of catching back up in summer school. But, there’s also no shame in taking five years to finish your degree instead of four and typically you have five years of eligibility to compete on the swim or track and cross country teams. While at Mac I ran track and cross country which really helped my training for triathlon. I went into university knowing that I would have to take a reduced course load to be able to fit everything in. Two years into my degree, I dropped down from four classes per semester to three. It made a huge difference; not only was I able to train properly, but my grades went from the mid 70s to an 85 per cent average. The difference was night and day.

2. Timetables – not just for class
It is important to plan your classes around your pool time. Once you know the regular times than you can swim, make sure that you do not overlap your classes with this time. You can run and bike pretty much any time of the day, but swimming pools have set schedules that you have to work around.

3. Respect the pressure of school
Don’t plan a race close to the due date of a major project or test. Usually what ends up happening is that you don’t do very well at either because you are thinking about school leading up to the race, and thinking about the race when you are doing school work. I had a few bad experiences with this when I went to race in Florida in 2013. I had two races spaced out by one week (ITU Clermont and Sarasota), and a paper due the day I got back. I ended up spending most of my time stressed out and did not race very well.

4. Rest your mind
Remember that studying is not really resting. While you are studying you may be resting your body but your mind is still working. You can get away with this for a time, but eventually it can wear you down. When I reached my breaking point it usually took a few days to get back on track. Instead, slot in some actual recovery time, even if that means backing off your training just a little bit. Last year I tried to do 25 to 30 hours of training per week during school. I did not have many great results until the summer break when I could just focus on triathlon. This year, however, I backed off to 20 hours per week over the school year and have seen some massive personal best times and great results while I was still in class. Sometimes, less is more.

I hope this can help out anyone who is a student triathlete. If you love it you will find a way to fit it all in.