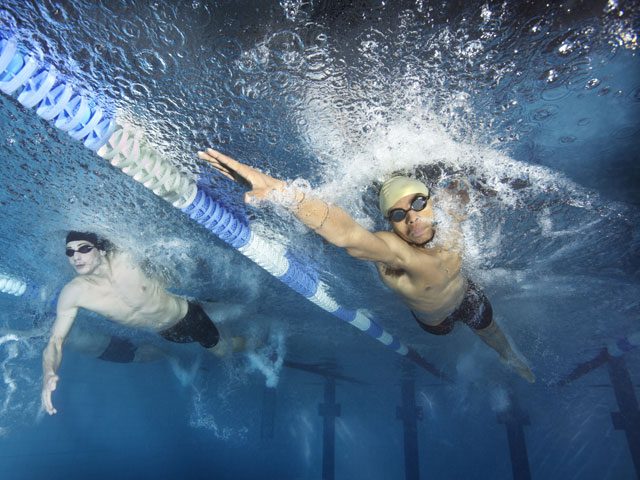 With fall upon us, lots of Canadian triathletes are hitting the pool to strengthen their swimming and stay in shape during the off-season. Depending on what time of the day you get your swim in, public pools get crowded easily and it can be difficult to complete a workout uninterrupted. How do you make the most of your solo swim practice during peak public swimming hours? Following these six unwritten rules of the lap swim is a good place to start.

Most pools have signs to designate lanes as either fast, medium, or slow. Keep in mind that these speeds will change at any given time depending on the the level of the swimmers already in the pool. You may find the fast lane is perfect for you on some days, but other days you have someone on your toes the whole time. When you get to the pool, take a quick look around at all the lanes before you make your decision. Just because you have to swim in the slow or medium lane doesn’t mean you’re not fast!

Sometimes these signs also designate the direction you’re meant to follow when circle swimming (up one side, down the other). Not all lanes may be following the same direction, so double check yours before you start swimming. If you happen to be lucky enough to have a lane to yourself, it’s common courtesy to still stick to circle swimming so that if someone else gets in, neither of you have to worry about a mid-lane collision.

3. Leave 10 seconds in between

Even though you’re probably around the same speed as the swimmers in your lane, leave a few more seconds than usual between yourself and the swimmer before you. When everyone’s completing their own set, it can be hard to tell when other swimmers might be slowing down or speeding up. The 10 second rule usually ensures you give them enough space to flip turn (or touch the wall) at the other end and you don’t catch them mid-lap.

This is one some swimmers don’t seem to understand. It’s perfectly okay — in fact, appreciated — to switch to a slower lane if you’re going to be doing some pull or kick work. This avoids people having to pass you which is especially annoying if there are lots of swimmers in the lane. Don’t be afraid to jump in the slow lane for a while, too. Slow lane swimmers aren’t poor swimmers. Anyone who says otherwise is probably insecure about their own ability.

It’s never a bad idea to give your lane mates a heads up on what you’ll be doing and you’ll probably find that many do the same for you. Having an idea of what sets everyone is doing will help you coordinate your own workout. And sometimes it’s a great way to meet a new training partner! Swimmers are friendly folks and I have often found that they love to share their workouts and equipment with others in their lane.

Lap swimming can be frustrating when there are lots of people in the lane. Sometimes people stop unexpectedly at either end of the lane, sometimes they slow down without warning and sometimes they act oblivious to other swimmers. Being patient and courteous to everyone in the lane will make everyone’s experience more positive and by setting a good example of pool etiquette, you’ll probably unknowingly remind another swimmer of these six rules.