It’s been a wild ride for the athletes over the last year and a half, but in the end Canada was able to secure two men’s and two women’s spots to Tokyo, which means that the athletes will have the opportunity to compete in both the individual and Mixed Team Relay races in Tokyo.

After Olympic qualifying was shut down last year because of the COVID-19 pandemic, Triathlon Canada rejigged its qualifying criteria before Olympic qualifying resumed again in May, all but naming Tyler Mislawchuk and Joanna Brown to the team. Here’s a lowdown on how the rest of the qualifying picture panned out.

Related: Who will represent Canada at the Olympics

Heading into the qualifying period, Canada hadn’t earned a qualifying spot for the Mixed Team Relay, which guarantees a country two men’s and two women’s spots. Seven teams had been assured spots, with the final three guaranteed spots to be decided at the World Triathlon Mixed Relay Qualification Event in Lisbon. Canada appeared to be in the hunt for one of the final three spots, but by the time race day came around, our top competitors had withdrawn from the relay.

How did that happen? Before the Olympic qualifying resumed, it was pretty certain that Canada had qualified two men for Tokyo. With one of those spots pretty much assured to go to Mislawchuk, even though Matthew Sharpe’s ranking was how Canada earned that second spot, he hadn’t officially qualified for the team – he was competing with Alexis Lepage for the chance to go to Tokyo. The selection criteria was based, for the most part, by individual results, not the mixed team relay. That meant Sharpe and Lepage were set for a head-to-head race for an Olympic spot at the individual race in Lisbon, which took place the day after the relay event. Sharpe made it clear long before that he would have to focus on the individual race. Then, during race week, Mislawchuk and Lepage also pulled out of the mixed team relay.

Related: Did Triathlon Canada give up on an Olympic Relay Team? Amelie Kretz says yes

After racing at the World Triathlon Championship Series Yokohama, Joanna Brown and Amelie Kretz both flew to Lisbon, intending to participate in the relay. Brown ended up having to pull out with health issues, and once she realized that Canada wouldn’t be fielding a top team in the mixed team relay, Amelie Kretz pulled out, too, in order to focus on the individual race.

Related: It is safe to say that absolutely nothing has gone according to plan this trip

Canada fielded a team that included Emy Legault, Aiden Longcroft-Harris, Dominika Jamnicky and Martin Sobey, athletes who have competed on the world stage (Jamnicky represented Canada at the Commonwealth Games in 2018), but weren’t part of the Canadian team that finished fifth at the Mixed Relay World Championships in Hamburg in 2017 and 2019. In the end the team was lapped out of the race.

That meant that unless Canada could qualify another woman in the individual event in Tokyo, it wouldn’t be able to participate in the relay.

With Canada missing the relay opportunity, the only way Kretz would be able to return to the Olympics would be if she could move herself high enough in the rankings to earn Canada a second individual spot, and then be picked by Triathlon Canada for the team.

After a stellar swim in Yokohama, Kretz found herself in the chase pack off the bike alongside Brown, and surged into fourth place in the first few kilometres. While Brown put together a solid run despite a budding kidney infection and a broken nose, would run her way to 13th. Kretz would struggle through the latter stages of the run to finish 33rd.

A week later, though, Kretz’s decision to pull out of the mixed relay in Lisbon turned out to be a good one as the Ste-Therese, Que., native finished sixth, moving her up to the 53rd spot in the Olympic ranking, enough to give Canada a second women’s spot in Tokyo, and also give Canada a chance to compete in the inaugural mixed team relay at the Games. She followed that performance up with a 21st-place finish at WTCS Leeds and then rounded out Olympic qualifying with a fifth-place finish at the World Cup Huatulco event in Mexico. Her efforts were enough to maintain a second women’s spot in Tokyo for Canada. 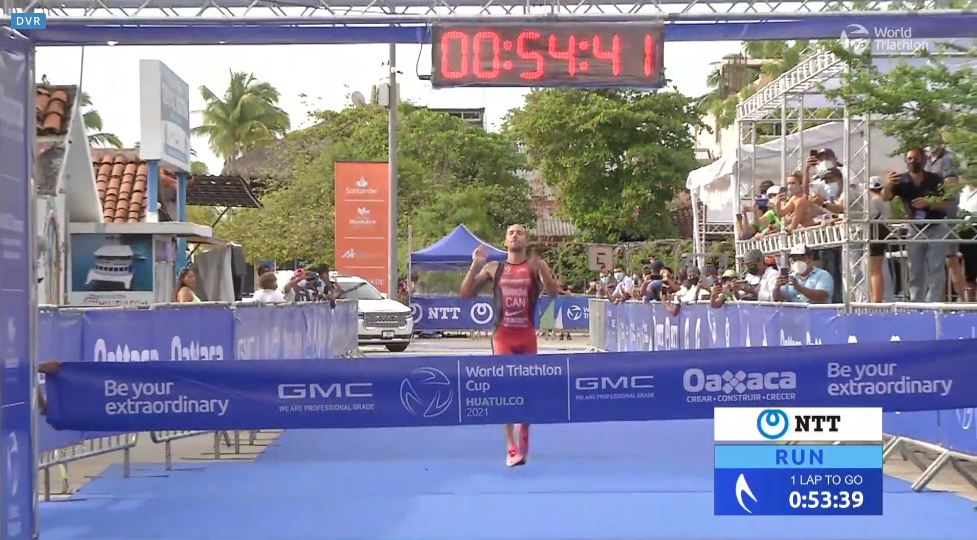 Part of the criteria for our second men’s competitor at the Games in Tokyo is the athlete’s ability to act as a domestique for Tyler Mislawchuk. That strategy helped him take the Tokyo Test Event in 2019, and Triathlon Canada hopes that a similar plan will help at the Olympics this summer. At the World Triathlon Cup Lisbon race both Sharpe and Lepage were on hand to prove their ability to help Mislawchuk during the race. After a great swim, Lepage struggled early in the bike and was out of the race after just a few kilometres. Sharpe was then left to do the domestique duties through the ride, which became even more important when Mislawchuk flatted. Sharpe waited for his countryman, then tried to help him back to the pack. They were never able to get back in the mix, though. After exhausting himself with a huge effort on the bike, Sharpe pulled out during the run. Mislawchuk would finish the day in 47th.

A few weeks later, though, the domestique strategy was put into action again at the World Cup Huatulco, where Mislawchuk was looking to defend the title he won in 2019. The day went exactly to plan as Sharpe pulled his teammate to the front of the pack at the end of the bike to set up a perfect transition for the defending champion. Mislawchuk followed that up with an outstanding run to take the win.

All of which means we’ll have four athletes competing in Tokyo in both the individual and relay events.