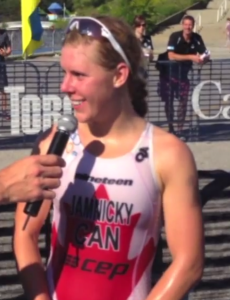 This weekend marks the 19th running of  the Tiszaujvaros ITU Triathlon World Cup in Hungary. Part of a week-long triathlon festival called Triweek in Tiszaujvaros, the World Cup features semifinals taking place on Saturday August 8, and finals running on Sunday August 9. Five Canadians will be lining up on the swim pontoon to tackle the sprint distance course on Saturday. The Canadian crew includes Alex Coates, Dominika Jamnicky and Emy Legault on the women’s side and Alexis Lepage and Xavier Grenier-Talavera on the men’s side.

In the women’s race, hometown favourite, Margit Vanek, who was second at the event in 2014 is expected to push the pace as will country woman Zsofia Kovacs who was fourth in 2014. Americans Chelsea Burns and Jessica Broderick could continue the US medal streak on the circuit. On the men’s side, Hungary’s Akos Vanek and Rostyslav Pesvtsov were first and second at the last year and are both in great form.

The three-lap 750m swim takes place in City Lake with an average temperature of 24 C degrees so is likely to be non-wetsuit. The flat two-loop 20km bike course is highly technical and the three-lap 5km run is also flat and expected to be fast.