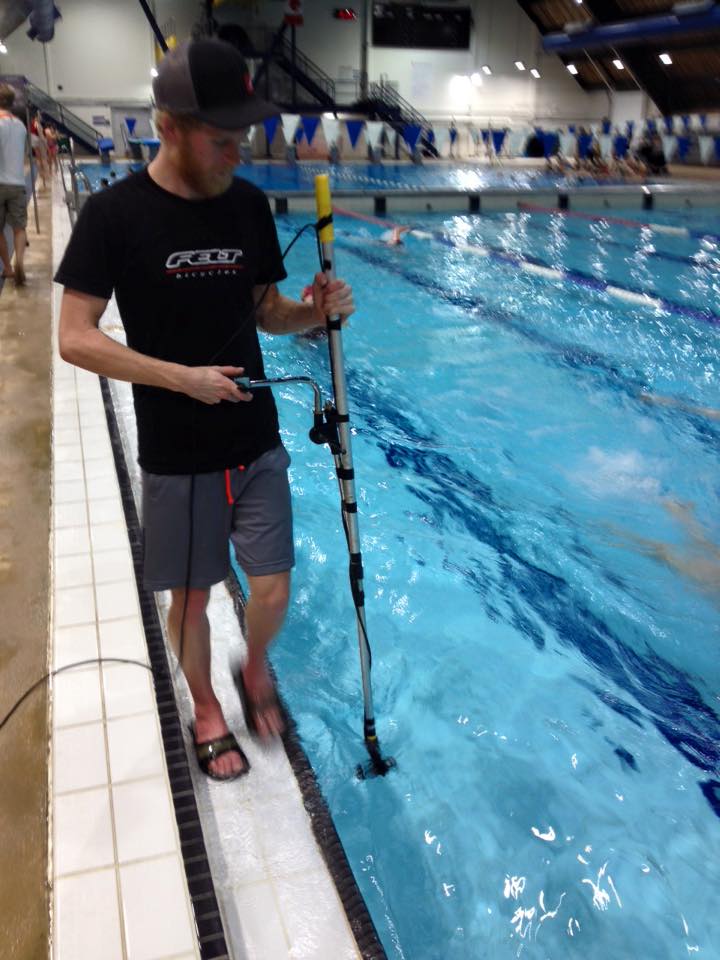 Alex VanderLinden is a pro triathlete who lives and races primarily in Ontario. Each month, he’ll write a column for TMC with insight into the world of pro racing, with opinions and observations.

My parents had me in swimming lessons when I was four or five years old.

Down at the local Y in Chatham. I didn’t take to the water like a duck. I was skeptical. I wanted to go fast, I wanted to race, I wanted to get to the other side of the pool faster than any other kid. When we moved from freestyle to some of the other, more technical strokes, it occurred to me that we were all moving slower than I wanted to swim.
So my interest waned and that was the end of swimming lessons for me. My winters were filled with basketball, my summers with soccer. I thought no more about the pool.
That changed a few years ago when a friend at Western University in London put the idea of a ‘Splash and Dash’ into my head. This was a 500 metre swim followed by a five kilometre run. I hadn’t been in the pool since those early days in Chatham, but I didn’t want to back off of competing. I climbed out of the pool for that ‘Spalsh  and Dash’ in last place, but then began to pick people off on the run.

That was my early introduction into the world of triathlon but if I was going to compete at any level, I’d have to learn to swim properly.

In this sense, I was blessed by good fortune and it arrived in the guise of Ken Fitzpatrick. Ken swam breaststroke for Canada in the 1984 Olympics and he’d dabbled in triathlon after he retired from competitive swimming. During my time at Western, he was also assistant coach of the varsity swim team but more importantly for me, he was the main man at the London Silver Dolphins – the masters team that swim out of Western.

By now, I’d competed in a few local triathlons and I had an inclination that I wanted to make it as a professional triathlete. I spoke to Ken and laid out my plans, and through that masters swim group, he pushed me to new levels in the water.

He opened other doors, too. He put in some good words with the varsity coach and I was allowed take part in some sessions with the squad. It was during those sessions, hanging on for dear life in the outer lanes, that my swimming was brought to the next level.
The two winter camps I attended stand out in my mind.

From right after Christmas Day up until January 5, we swam three sessions every two days, logging six and a half hours in the pool during those three sessions. Day one: two hours in the pool that morning, followed by two and a half  hours in the afternoon. The next day, three hours in the pool. On and on it went until my arms ached. When I climbed out of the pool on January 5, I was dog tired, but I had a new confidence in my swimming ability. I typically use my friend and rival Cody Beals as a barometre of my progression. The first year I turned pro, Cody was putting time into me in the swim. The following year, I was coming into T1 alongside him and sometimes in front of him. The hard work was paying off.

But it’s taken an obsession with swimming to bring me to this level.
Really, I didn’t learn to swim until I was 20 years old, but because swimming was my weak point, every morsel of information and opportunity that came my way, I digested it, processed it and put it to work.

My swimming has inevitably plateaued a little over the past two years, but the obsession continues. Tiny, fractional gains are what I’m interested in now and the obsession continues. Ironically, because I’ve been so dilligent about my swimming, it’s probably the sport I’m most confortable coaching at a triathlon level. I like to disect an athlete’s stroke, help them understand how to make some gains in the pool and then hopefully see it pay off down the line.
I love the debate and ideas that reverberate around swim technique, but I also see the confusion this sometimes brings, particularly for the age grouper.
You’re reading one thing on Slowtwitch, and another in Brett Sutton’s blog. You’re wondering ‘should I swim slow and fast, long and fast, long and slow?’ ‘Should I focus on drills or technique?’ That’s the beauty and the danger, but for me, discipline and belief in one philosophy are critical.
It can take years – I’m talking five, six, seven years – to reap the rewards in the water. That’s why swimming is the most intricate piece of the jigsaw puzzle.

Read his other blogs here.