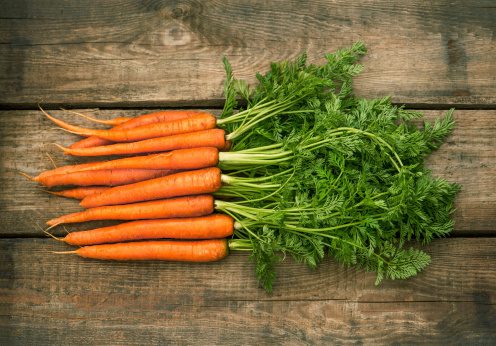 Carotenoids are the stuff that makes your fruit and veggies brightly coloured. Almost every parent has said to their kid at some point, “eat your carrots, they’re good for your eyes!” after research showed that the beta-carotene in orange vegetables can help prevent eye disease. Lycopene, which is the reddish pigment which colours watermelon and tomatoes contains high levels of antioxidants. Carotenoids are the science behind the advice of nutritionists to “eat the rainbow.”

A recent study from Purdue University, published in the American Journal of Clinical Nutrition, analyzed 16 people consuming raw vegetable salads at different times. The first salad contained no egg, the second contained an egg and a half, while the third salad contained three eggs. The eggs were scrambled to ensure both the yolks and egg whites were consumed.

What the researchers determined was that the absorption of the carotenoids from the vegetables was 3.8 times higher with three eggs included in the salad, than when no eggs were included. The belief is that the amino acids, unsaturated fat and B vitamins contained in the eggs allow for elevated absorption of the vegetables. While many salad dressings can be made with healthy fats, often people trying to adopt a healthy lifestyle opt for low-fat or fat-free dressing, which may be inhibiting their carotenoid absorption.

The best thing may be to make a simple homemade vinaigrette and throw a couple hard-boiled eggs on top for a smarter salad. A meal like this is an ideal lunch for busy runners, as it is nutritious and easily portable. A single egg usually contains only 70 calories and six grams of protein.