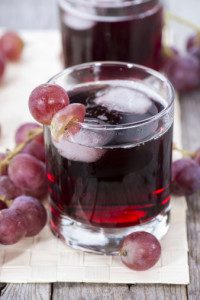 Having yourself a glass of grape juice before and after a workout might just help you go the extra distance. That’s what a new study conducted by researchers at Brazil’s University of Paraiba has concluded.

The study looked at the effects of purple grape juice on recreational runners, both male and female. The researchers from the university divided the runners into two groups giving one group 700 mL of whole grape juice split before and after a seven kilometre run. The other group ran without consuming the juice. They continued the experiment for 28 days.

Published in Applied Physiology, Nutrition and Metabolism, the researchers state that those who drank the grape juice saw significant improvements in their running. The most notable finding was that the runners found that they could run longer distances before hitting a point of exhaustion. On average, they were able to increase their running time by 15 per cent.

Drinking whole grape juice also reduced inflammation and gave the runners a boost of antioxidants. Those interested in trying it out have to keep in mind that these results only hold true to whole grape juice not it’s sugary counterpart or red wine. Only recreational runners were tested in this study– results may differ for runners of higher fitness levels.