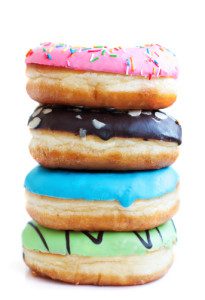 A new study conducted by Rutgers Robert Wood Johnson Medical School and published in Cell Reports has shown a connection between a hormonal deficiency and overeating. The researchers attempted to identify a cause for what they termed as “hedonic hunger, ” the desire to eat for pleasure beyond what the body actually needs for energy.

The researchers found that when the hormone GLP-1 was reduced in the lab’s mice, the mice consumed more than calorically necessary and gravitated towards foods with a high fat content. When the amount of GLP-1 was increased in mice, they were able to control their preference for high fat foods.

GLP-1 peptides are secreted by the digestive system and are supposed to signal to the brain when the body should stop eating by regulating appetite. Though a deficiency in GLP-1 is certainly not the only reason why overconsumption can happen, as overeating is often associated with points of high-stress or other mental health issues, it may shed some light on treatment of obesity.

The GLP-1 hormone is activated in the mesolimbic nervous system, which is also known to control other addictive behaviours, such as drug and alcohol abuse.