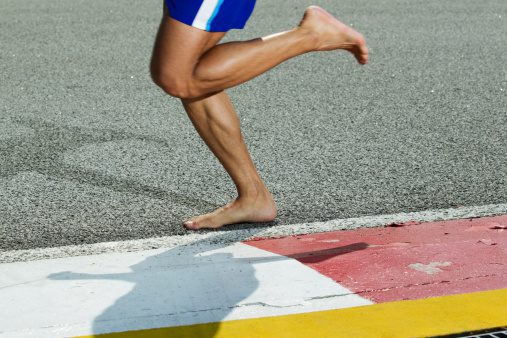 Recent research suggests it might be tough to transition out of your shoes if you’re older.

A few years ago, a group of researchers at the University of Kansas Medical Centre found that teenage track runners had a fairly easy time transitioning from heel striking in their traditional running shoes to forefoot striking in their racing flats or running barefoot. It was a small sample size of only 12, making the results tough to trust, but the swing was pronounced. The tests were done on a treadmill at varying speeds.

The same research team wanted to know if older, experienced runners could swap their shoes as easily as the teenagers. They rounded up 26 runners who had been running regularly without injury for at least 10 years and had them run the same tests the teens were put through. All the runners were over 30.

Results were notably different. Though some didn’t seem to have problems switching to a forefoot strike, many more did than in the test on teenagers, suggesting years of running may ingrain a pattern making it tougher to switch.

All the results need to be taken with a grain of salt. The sample sizes were small and not a lot of research has been done on the topic, but it does suggest if you’re a healthy runner, not struggling with injuries, swapping out your traditional shoes for minimalist ones may not be worth the gamble.