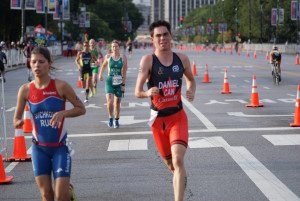 Petitclerc, a five-time Paralympian and 14-time Paralympic gold medalist in wheelchair racing, knows the importance of community support for each athlete’s success. She has been touring Canada for the campaign that kicked off late last year with a visit to Ottawa/Gatineau on December 3rd, 2015. On January 19th, she’ll visit Stefan Daniel’s hometown of Calgary for the tour’s second visit. In Calgary, she will meet with Daniel and wheelchair basketball player Chad Jassman, a London 2012 Paralympic Games gold medalist.

Stefan Daniel, the 18-year-old world champion, makes his Games debut at Rio. After a year of gold medal performances in 2015, Daniel earned TMC’s Triathlete of the Year award. This is triathlon’s first time included at the Paralympic Games.

Petitclerc’s Calgary stop will take place at Mount Royal University’s gym at 9:30 AM on Tuesday, January 19th. Media are invited for photo, video and interview opportunities – and the chance to try wheelchair basketball.

The Canadian Paralympic Committee seeks to “lead the development of a sustainable Paralympic sport system in Canada to enable athletes to reach the podium at the Paralymic Games.