SRAM has released their new tri-specific 22-speed gruppos. The new gruppos were used by almost all of SRAM’s sponsored riders at the Ironman World Championship in Kailua-Kona, Hawaii last year. Now the rest of the world can have a chance to ride the new set up. 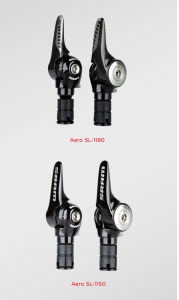 The 22-speed gruppos will be available for both the top-end Red and next-in-line Force triathlon or time trial gruppos. In addition there are new 22 R2C bar end levers, which feature a new ergo shaped lever design and provide easier shifting. The two-position YAW front shifters don’t require any trimming and allow you to use all of your gears regardless of which chainring you’re using.

There are lots of studies out there that have shown that horizontally mounted “between the arms” (BTA) hydration systems are the fastest, which is why pro triathlete Jordan Rapp asked SRAM to come up with a system that that would get the job done while also incorporating a computer unit.

We’re going to be doing some long-term reviews of these products and will provide regular feedback on how we’re making out with them here on triathlonmagazine.ca