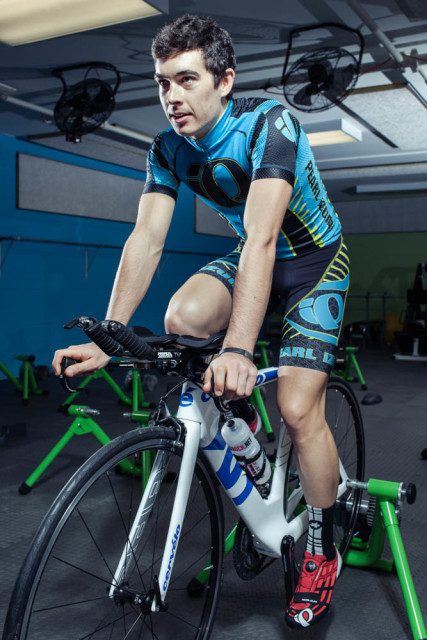 Montrealers brag that their city is Canada’s urban-cycling mecca. With Bixi, the city’s subsidized public bike-sharing system and more than 600 kilometres of dedicated cycling lanes, that’s not an empty boast.

I Bixi to work from April until November. I do my hill training up Mount Royal on my tri-bike until the snow flies. But winter biking is not for me. I tried it a decade ago: fitted my mountain bike with studded tires, bought impermeable cycling pants and thermal booties. And – thank heavens – I slipped my son’s cast-off ski helmet on over my toque. I say “thank heavens” because two weeks into my winter-riding career, I hit black ice, skidded out and smashed my head into the pavement so hard that the helmet split in two. I saw stars and promised myself: never again.

Those were my early days as a triathlete, and so I opted for cross-country skiing and running – crampons de rigueur – to stay in shape. However, the year that I signed up for my first full Ironman, I knew I was going to have to do some serious seat-time on my own bike all winter, if there was a hope in hell I was going to be able to manage 180 kilometres come August.

Eighteen weeks of spinning on a Computrainer alongside other sweaty athletes in the basement gym of Montreal’s specialty tri-shop, Cycle-Technique, and I hit the pavement at the end of April barely puffing as we climbed the season’s first hills.

What a difference those three hours of spinning a week made. Not to mention the growing camaraderie and friendly competitive spirit in that spinning room. Chasing the peloton – while sitting still – kept me motivated and focused on my summer goal.

Not everyone lives near a gym or bike shop that offers a spin class, nor can every triathlete afford a computerized trainer for home.

Enter Michel Brazeau. In his thirties, Brazeau – a couch potato computer whiz – noticed his growing spare tire. He joined a cycling club, lost the spare tire and for the heck of it, decided to do a time-trial race. He showed up in baggy shorts and a cotton T-shirt with a road bike that was way too big.

“I ended up doing a 37 km/h average speed,” Brazeau says, shrugging it off modestly. “That was pretty good – good enough to finish 12th, with a lot of serious guys there. They were like, ‘Who is this guy?’

Brazeau knew nothing about winter bike training. He could see every April how cyclists who trained indoors all winter had a leg up on those who took a five-month break. But he couldn’t get past the boredom factor.

“There are so many people who just put on a movie, and they try to get through it while on their trainer,” he says.

Brazeau wanted an interactive experience. Always a tinkerer he built the software to make such an experience possible. It’s called and Powercurve (powercurvesensor.com) – software the champion duathlete has made available free online. The program even allows you to handicap yourself (or your partner).

“I wanted to ride with my girlfriend, who is not as strong a cyclist as me,” Brazeau explains, “It’s not fun if you’re riding with somebody and she can’t even stay on your wheel.”

I had a blast being part of Brazeau’s field-testing last winter – in a room with 10 other cyclists, all bigger, stronger and faster than me. In time-trial mode, with my handicap set, I kept up and even occasionally passed them on the home stretch. Everyone, that is, except the only other woman in the room – a world-ranked junior rower young enough to be my daughter.

Brazeau, at home with his one-year-old toddler, Cadel, would sometimes join us virtually, setting the pace on, say, the ride from Varadero to Matanzas, Cuba – a ride he captured on video during a bike trip last January.

You can download the results onto compatible software such as Trainingpeaks.com and track your progress through the winter. But come spring, the best gauge of your winter pedalling will be how your legs, your butt and your lungs feel when you hit the pavement and trade virtual for reality.
Triathlete Loreen Pindera is an editor and broadcaster at CBC News in Montreal.