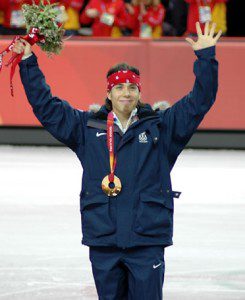 On the feet of Super Bowl MVP Hines Ward,  Apolo Ohno joins  the Built With Chocolate Milk team and will race the Ironman World Championship in Kona this October. The American speed skater and two-time gold medallist will learn to train as an endurance athlete.

Ohno is clearly nervous and excited to take on the new challenge as Hines did under the eyes of his fans who watched him train online. “Although I was a very strong and fit athlete, it is a detriment that I am a sprinter,” says Ohno. “I don’t have the vast reservoir of endurance activity. I have to physically change the way that my body responds to training. I really am a newbie [to the sport], but I am taking it all in stride.”

Last year Ward finished the grueling race in  13 hours, 8 minutes and 15 seconds. He  swam a 1:20:01, biked a 6:21:12 and finished off with a 5:12:56 run. “Completing the Ironman and crossing that finish line—I learned so much about myself,” Ward says. “The sky’s the limit for me now. This winter I tried snowboarding. I’ve gone white water rafting. All the things that I was too scared of before, I’m crossing them off my bucket list.”

Both athletes have had to shift training modes. Ohno hopes that his transformation will inspire others just as Ward did. “Here’s a guy who knew nothing about becoming an endurance athlete,” Ward says. “Be inspired. If I can do it maybe that’s inspiration for someone who’s on the verge of doing an Ironman. Even though we’re athletes, we come from a different world. Our training has been nothing but short intervals.”

Ward capped off his race in Kona with an M dot tattoo. “It was an experience I will always cherish,” he says. “The tattoo I have on my calf, it’s a badge of honor. I am humbled that the endurance world would accept me.”