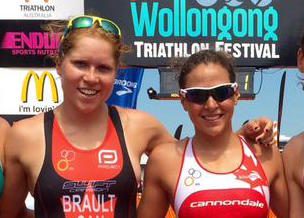 Canada’s Amelie Kretz finished her first career World Triathlon Series race with a solid 13th-place at Australia’s Gold Coast race on Saturday. Although she started the WTS in New Zealand two weeks ago, she crashed on the bike and wasn’t able to complete the race, but the 21-year-old Kretz mixed it up with deep talent finishing the 1500 m swim, 40 km ride and 10 km run in 2:00:19.

Kretz told Triathlon Canada, “It is a good start of my WTS career. I wasn’t nervous heading into the race. My success in the early races this year gave me the confidence to be relaxed and know I was here to execute a strong race from start-to-finish.” Kretz took her second career World Cup medal earlier this spring in Mooloolaba, Australia and won a World Cup in Edmonton in 2012.

Despite exiting the water in the front pack, Kretz got caught behind a crash on the first lap of the bike. She worked with fellow Canadians – Sarah-Anne Brault (Quebec City) and Paula Findlay (Edmonton) in the chase pack for the remaining eight laps on the highly-technical five-kilometre bike course that featured tight turns, hills and quick descents.

“I got off the bike and my legs felt pretty good. I got into a rhythm quickly and tried to stay relaxed. I forgot how much an Olympic distance hurt! On the last lap I was starting to die but found an extra gear and caught some girls to finish 13th. I’m happy with my first WTS finish and looking forward to the next one!”

Brault took her turn at the front of the chase pack on the bike, but dropped back in the field on the run. Brault finished 28th at 2:01:57. Findlay did not finish the race.

Gwen Jorgensen made history capturing her eight straight win and eleventh career title in 1:56:59. The US women dominated the day sweeping the podium with Sarah True in second in 1:58:17 and Katie Zaferes in third in 1:58:35.

On the men’s side, Jonathan Brownlee won the race in 1:46:53 scoring his 10th career WTS title. Mario Mola won the silver with a time of 1:47:11 and Javier Gomez took third in 1:47:21. Scoring a career-best 18th place finish, 20-year-old Tyler Mislawchuk of Manitoba finished in 1:49:13. Fellow Canadian Alexis Lepage, of Gatineau, Que. did not finish the race.