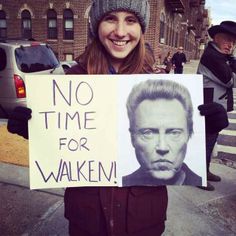 Whether you notice it or not, those silly signs and generic “Go random stranger” cheers from the crowd might actually be helping you run faster and further than you ever thought. Seeing and experiencing positive support , whether you notice or not, may significantly improve your performance.

A new study published in Frontiers of Human Neurosciencefound that when subjects were shown happy, smiling faces or short positive words and phrases, they were able to exercise for longer and had a lower perceived level of exertion.

The experiment was done with cyclists who were instructed to continue until exhaustion. Subliminal cues, which appeared for only 0.02 of a second and were therefore not consciously recognized , were shown to cyclists on a screen while they exercised. Those shown the happy faces and inspiring words lasted significantly longer than those shown unhappy faces or neutral words. They also reported a lower rating of perceived exertion (RPE). 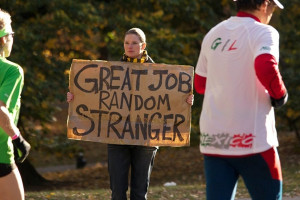 This type of research is the first to show the importance and effectiveness of subliminal supportive cues to decrease exertion and increase performance.

Some suggest that various technologies such as Google glass or even our GPS watches could be used to deliver such cues and better our times. Until then, perhaps you should spend the extra second to glance at those race signs and smiles in the crowd.