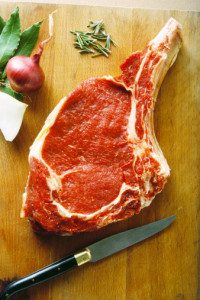 The paleo diet, that emphasizes meat, vegetables, nuts and fruits while eliminating dairy and grains, has grown in popularity in recent years. The rationale behind the diet is to eat as one’s ancient ancestors ate.

However, scientists have just completely debunked this paradigm of thought, claiming that after in-depth analysis of the genetics, physiology and nutrition of Paleolithic ancestors, they found that the true paleo diet included something important that the modern paleo diet does not: starchy carbohydrates.

These ancient ancestors, living between 2.5 million and 10,000 years ago, ate starchy plants like potatoes (and possibly even cooked them over fires). Scientists claim these carbohydrates were essential to promoting the growth of the human brain.

Dr. Karen Hardy of the University of Barcelona, author of the new-found review that will appear inThe Quarterly Review of Biology, has stated that, had the Paleolithic people not eaten carbohydrates, they would not have been able to be the runners they were. As most of us modern runners are well aware, carbohydrate stores are essential for distance running. This was no different back when our ancestors had to run down their prey.

What is key to note about the diet of these ancient people, is that the carbohydrates they did consume were complex carbs, not the simplified and over-processed carbs often found on contemporary grocery shelves.

Dr. Daniel Lieberman, author of The Story of the Human Body, also warns that, just because our ancestors ate a certain way, doesn’t necessarily it’s the healthiest. “We didn’t evolve to be healthy; we evolved to have as many offspring as we can,” he stated.