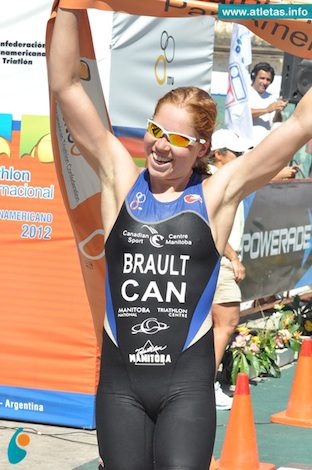 Canada’s Sarah-Anne Brault finished fourth at the World Triathlon Series season-opener in Auckland, New Zealand on Sunday. “I’m super happy. It is so much higher than I expected. It is ridiculous,” said Brault.

Charging out of the second transition in 16th spot after the punishing 40-kilometre bike course, the 24-year-old from Winnipeg clawed her way to the lead of the chase pack in fourth after the first of four laps on the run. Leading the chase group filled with five of the greatest women’s names in the sport, Brault held that position until the final 500 metres.

“I really worked on learning to swim over the last two months so coming out in the lead group was awesome today,” said Brault. “I came back in the bike and the biggest thing in the run was not to get intimidated by the names around me. I knew I can run. That is what I do.”

With Great Britain’s world number one, Jodie Stimpson, running comfortably to gold, Germany’s Anne Haug pulled away from the pack for the silver medal, leaving Brault was in a fight for the bronze with Helen Jenkins, of Great Britain who outsprinted her down the finishing shute.

Brault completed the race in  2:09:15 with the fourth-fastest  run of the day at 35:29.  Recovering from injury, Brault hit the start line for the first time in nearly one year just three weeks ago where she won an Oceania Cup Olympic distance race in Australia.

“On the run I was scared not to lead the pack. I didn’t want to drop back because I didn’t know if I could get back up. I just need to continue to learn to race at this level. I have been working with our new coach this year (Jamie Turner) and it really seems to be paying off for me.”

“My best World Triathlon Series finish was 11th in Hamburg last year. That was a surprise and this is even bigger, added Brault. “I don’t think this changes anything for me. My goal is to race WTS. I think this locks up a Commonwealth Games spot, which was a big goal for me this year.”

Following the women’s race, a trio of Canadian men toed the line. Andrew Yorke, of Caledon, Ont., was the lone Canadian to finish the race, placing 27th with a time of 1:58:56. Kyle Jones, of Oakville, Ont., and Victoria’s Andrew McCartney pulled out mid-way through the race and did not finish.

Spain’s Javier Gomez won for the third straight time in Auckland. The Olympic silver medallist, and reigning World Champion posted a golden time of 1:54:13. Gomez outran Jonathan Brownlee, who was forced to settle for the silver medal with a time of 1:54:33. Australia’s Aaron Royle rounded out the men’s podium in third at 1:55:49.