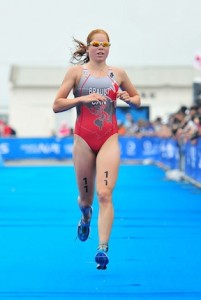 Pamela Oliveira continued her strong season with a win in the women’s race at the Pan American Championships. After exiting the water in front with over a minute advantage, Oliveira executed a solid bike and run to maintain the lead, which was good enough for gold in front of a home crowd. Although Sarah-Anne Brault (CAN) made up massive ground on the run, she just ran out of room on the course to reel in the Brazilian, leaving Brault with silver. Flavia Fernandes hung strong for third, giving Brazil two spots on the podium.

“I had a great race. I’m always a little nervous about my swim, but I conquered the waves really well on the Brazilian beaches, which set me up well for the rest of the day. On the run I was in chase mode the entire time, and I took time out of Oliveira every lap, but in the end I came up a little short. I still feel like I came here and got the job done; getting some valuable points and setting up the rest of my season in Europe,” said Brault to Triathlon Canada. “I know I will face much larger and faster fields later in the season but races like PATCO are great confidence builders for me and a way to iron out details that will be key in later races. ”

Rodrigo Gonzalez (MEX) ransacked the men’s competition, claiming the continental title by over a minute with a monster run. Gonzalez swam on the hip of the leaders to put himself in strong position on the bike. The Mexican went to work straight away on the bike, putting himself in front of the field with the fastest bike split of the day. He carried that momentum out on the run, where he locked down gold with another swift split. Gonzalez crossed over in 1:50:58, leaving Brazil’s own Reinaldo Colucci, Bruno Matheus and Diogo Sclebin to battle for the two remaining podium places. Although Sclebin secured the second fastest run of the day, it was Colucci who collected silver, with Matheus making it over the line for third.