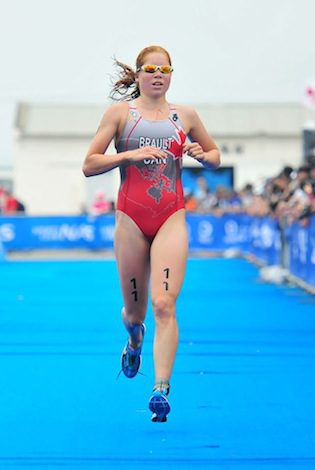 Sarah-Anne Brault  emerges as the top Canadian on the elite circuit, finishing in seventh place at the World Triathlon Series Race in Yokohama, Japan. She moves into fourth place in the overall standings on the way to securing her Olympic spot as this was the first official qualifying race of the series. On the men’s side Andrew Yorke posted a career-best result in 15th place.

Brault, the 24-year-old Quebecer turned Winnipeger, is on a roll. She was fourth at the season opener in Auckland. She battled the hot and muggy conditions in Yokohama to clock a time of two hours, three seconds (2:00:03) for the 1.5-kilometre swim, 40-kilometre bike and 10-kilometre run.

“I was quite excited to race this weekend because training has been going well. I felt like I could improve upon my performance in Cape Town (where I was 19th) because the courses were similar,” said Brault, who missed most of the 2013 season with a stress fracture. “I was very pleased with my swim, but just a little disappointed we didn’t stay away (from the chase pack.).”

“I learned from the Cape Town race, and built the run a little bit. I ran within myself and left it all out there,” said Brault. She has been working with Triathlon Canada’s new head coach, Jamie Turner. “I think the results show the work we’ve been doing Down Under and it has been a great feeling to be mixing it up with the big names,” she continued.

American Gwen Jorgensen ran through the field for the second straight year in Japan, posting a time of 1:58:36, 40 seconds ahead of 2nd place Ai Ueda from Japan. Poland’s Agnieszka rounded out the podium.

Caledon, Ont.’s Andrew Yorke has been getting steadily stronger and this weekend’s race saw a career best 15th place finish in 1:47:45. The men’s race came down to an exciting sprint between Spanish super stars Mario Mola and Javier Gomez with Gomez clocking 1:45:31 for the win and Mola taking silver just one second behind. South Africa’s  Richard Murray was third in 1:46:00.