On the screen it came up as a tie – the Zwift coverage on YouTube only shows differences to a hundredth of a second. The difference between Canada’s Lionel Sanders and France’s Antony Costes in today’s Z Pro Tri Series event was even closer than that, though – according to the race announcers the difference was just two thousandths of a second, leaving Sanders just out of top spot for the third week in a row of the indoor racing series. 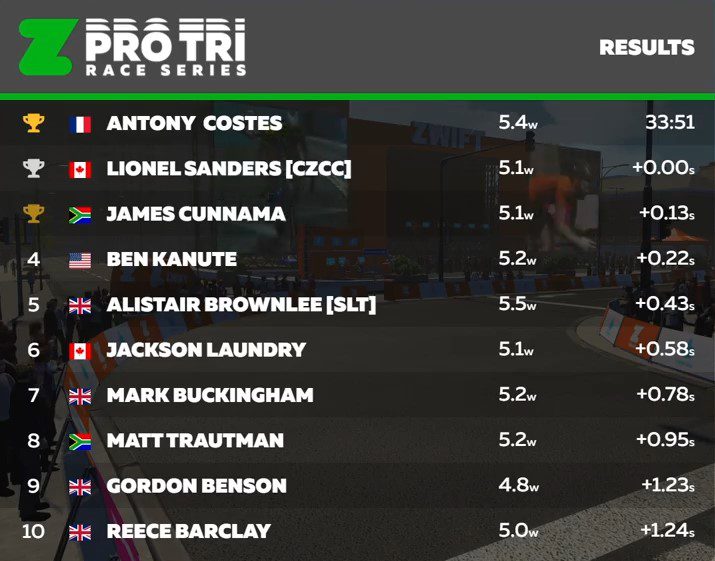 In the first race of the series Sanders went early in the sprint and ended up third, a tenth of a second behind Jimmy Kershaw. Today’s Crit City course lent itself to a sprint finish, and Sanders found himself in the mix with some of the sport’s premier cyclists including Great Britain’s two-time Olympic gold medalist Alistair Brownlee, South Africa’s James Cunnama, American Ben Kanute and Costes.

Sanders bided his time and made what appeared to be the winning move in the final few hundred metres of the race, but came up just short of the win as Costes, who, like Sanders, has been remarkably consistent in the Zwift series, taking second in the first race and third in last week’s hillier effort. (Sanders was fifth in that race.)

Another Canadian, Jackson Laundry, was also very much in the mix, taking sixth, just over a half-second behind Costes. 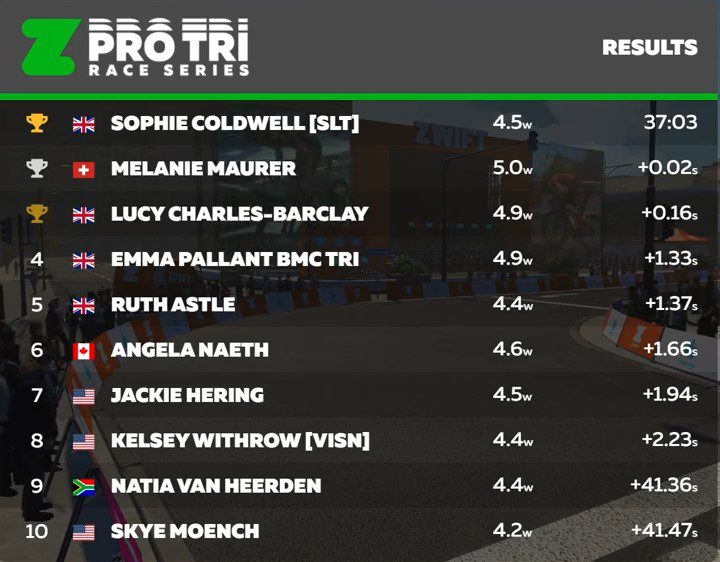 Coldwell takes the sprint in the women’s race

It wasn’t really a surprise that Great Britain’s Sophie Coldwell would take the sprint in the women’s race – she’s been racing on Zwift as part of the Super League team and competing against some of the world’s premier cyclists over the last month. She took sixth in the Watopia Cup in a pro cycling race, so was primed to take on her triathlon counterparts in the Pro Tri series on Zwift.

Coldwell ended up taking the race in a close finish with Switzerland’s Melanie Maurer and Great Britain’s Lucy Charles. Canadian Angela Naeth was also near the front, taking sixth.