Lionel Sanders and Lisa Bentley top the Triathlon Ontario Triathlete of the Year Awards winning the Mr. Triathlon and the Lisa Hamon Award (Female of the Year) respectively. While Sanders was making his mark on the sport internationally, including cinching fourth in his first Ironman 70.3 World Championship, he was also dominating his races at home. Sanders is a member of the 2014 Recharge With Milk Ambassador Team for the Multisport Canada race series—consistently supporting their events and adding depth to the field. He also won the category of Elite Male LC Triathlete of the Year.

Lisa Bentley’s contributions to the sport exceed her remarkable athletic performances. Even after retiring from racing professionally, Bentley has continued to energize the sport and raise its profile through her coaching, her encouraging positivity and her compassion. This year Bentley’s was inducted into Triathlon Canada’s Hall of Fame.

The Coach of the Year award went to Ming-Chang Tsai who brings both an academic and practical perspective to the sport. A former national team rower for Taiwan, Tsai is in the final months of his PhD in Exercise Science at the University of Toronto. His research involves developing mathematical models to predict performance and to quantify the utilization of anaerobic vs aerobic energy systems in endurance sports. He research stands to change the way endurance athletes train. His athlete, short course pro Leanna Lee insists told TMC,  “Ming has been my mentor and coach from the very beginning of my triathlon career, and I consider myself extremely privileged to be one of his athletes. His individual training plans are periodized and often tweaked on a daily basis to accommodate for each athlete’s specific needs. Any success I have achieved in triathlon and cycling would not have been possible without his guidance.”

The other award recipients are: 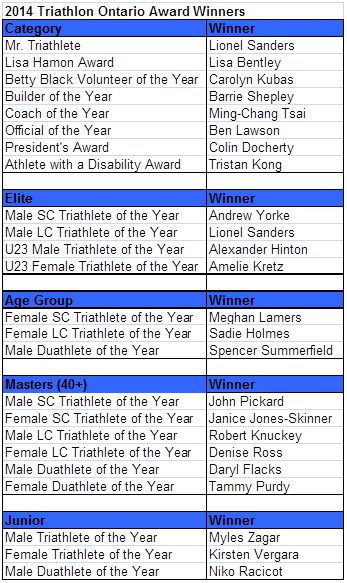