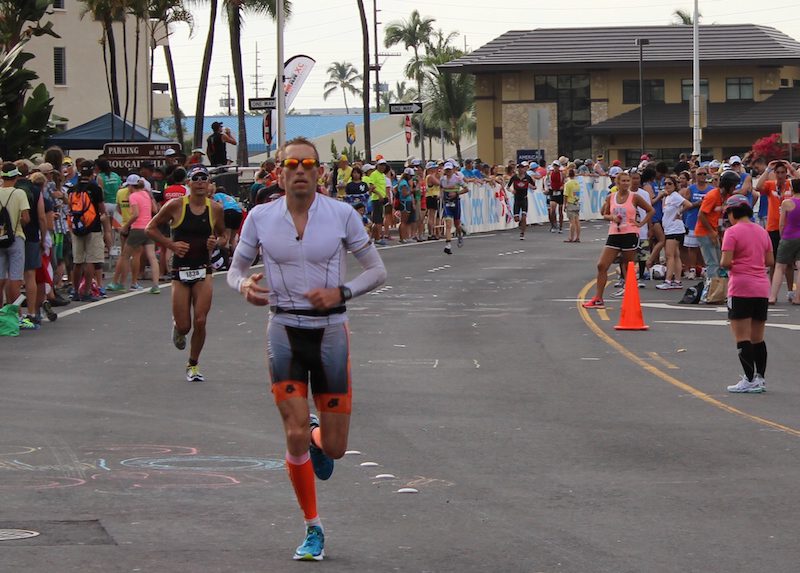 Richard Pady of Mono, Ontario, closed out his Ironman career at the 2014 edition of the Ironman World Championship on Kona. Triathlon still remains on the race menu for Richard, just not Ironman racing for this former professional triathlete.

TMC: Were you happy with what you were able to pull off on race day?

Richard Pady: My 2014 trip to Kona was in the works since my serious bike crash in 2010 that left me unable to exercise for the 2010 season. I laid out a 4 year plan to rebuild my fitness. I arrived in Kona a week before the race in the best shape of my life. I knew I had prepared well with coach (Jasper) Blake and that fitness would not be an issue come race day. Adapting to the heat was a whole other story. My body likes to sweat a lot. We tried really hard to get my body to adapt in training and I think it made a difference but in the end it was my biggest limiter on the day.

How did the race go for you? Take us through your day.

RP: In the swim I thought I was going well after a good start. I was in a good group of 10 swimmers and I felt the pace was ok. I was shocked when I exited the swim in an 1 hr flat (thought it would be faster).

Now, exiting the water in an 1 hr is kind of like driving on the 401 in rush hour. I tried to pick my way through the bikers but it was the longest pace line I’d ever seen. I got out to the left and just had to keep passing guys so I wouldn’t get called for drafting. Once up on the Queen K highway things settled a little and I found my rhythm. There was no real wind until about 40 km into the bike and then it was full on for the next 60 km and I loved it. After racing at Barrelman three weeks prior, I was well trained in racing in the wind and it was the same in Hawaii.

The climb to Hawi was 11 km full on into 48 km/hr headwinds. I was holding to my game plan and my legs felt great. The way back from Hawi was so much fun we now rocked down the hill and into the cross winds and I was flying. I love this section of the course. It was now pushing noon and it was really getting hot. My wife Heather said it hit 100 degrees (this doesn’t include the humidity). I was taking in 2 water bottles at every aid station trying to cool myself down. My heart rate was 25 bpm higher for the same effort all day. I was started to get worried I was pushing the internal system too much but I kept saying to myself I felt good and relaxed. At 140 km to 150 km I had the most fun of the day. A 32-48 km/hr  tailwind on a flat section of road and I was going 65-68 km/hr pushing 230w. Then at 150 km the wind just did a full and I mean 180 degree turn and we had head wind for the final 30 km. I was still feeling good and had fun passing lots of guys who had overdone it trying to hold onto the packs. I finished the bike strong and pulled into T2 at just over 6 hours into the race.

Nutrition on the bike:

On the run. I started off well but my HR was pushing way too high. I was running 7 minute miles (4:20/km pace) and my HR was 155-160. At home I do my interval training at this HR and can run 3:25-3:35/km pace. It was all about cooling the core down at every aid station I did the same thing. I was stuffing 2 sponges down my top, then two cups of ice down the top, ice water on my shirt and arm coolers. I would take in water and some form of sugar whether it be gel, perform, coke, or even Red Bull. I changed it up each mile. I would come out of the aid station feeling awesome and within 1 km be looking for the yellow shirts of the aid station volunteers. By the time I reached the aid station I was overheating again and so I would repeat. The cloud cover on the back half of the marathon was a nice treat. My legs felt ok and my energy was ok. I was just stuck in a slow and steady pace because of the heat. The final miles of the marathon were great. The stress of “can I make it” was gone and I had energy to push the last few hills. The finish line in Kona is always special and I crossed it with a new best time for here in Kona (9:36:21).

I am happy with the race my muscles felt amazing all day I just could not push to the effort I wanted to as I knew I would blow up due to the heat.  Some handle the heat better than others. My body doesn’t love it.

TMC: Was this indeed your last Ironman race, or do you want to go back to Kona?

RP: I have made it very public that Kona was to be my last Ironman. After 26 years in the sport I’m ready for a new challenge. One that doesn’t require so much time in the saddle.

RP: I’m excited about the 2015. My company Healthy Results is expanding and I look forward to having the time to give to it. But no Ironmans in my future. This new year is about testing out new ideas I’ve wanted to try for over a year now, in an attempt to train my body in ways I’ve never done before. After training for so many years I feel it is really important to change it up. I’m going to try my first mountain bike race, I’m going to do my first Xterra race which will both be a fun new challenge. I have a mountain bike coach I’m looking forward to working with to help improve my bike handling skills. I don’t have any road triathlons planned yet but if I know myself I’ll jump into one or two. It will be fun to see how my body responds to this unconventional training. I’ll still have some of the basics in my training but I’d say 75% of my training will be going against the grain. What will it entail? Stay tuned.