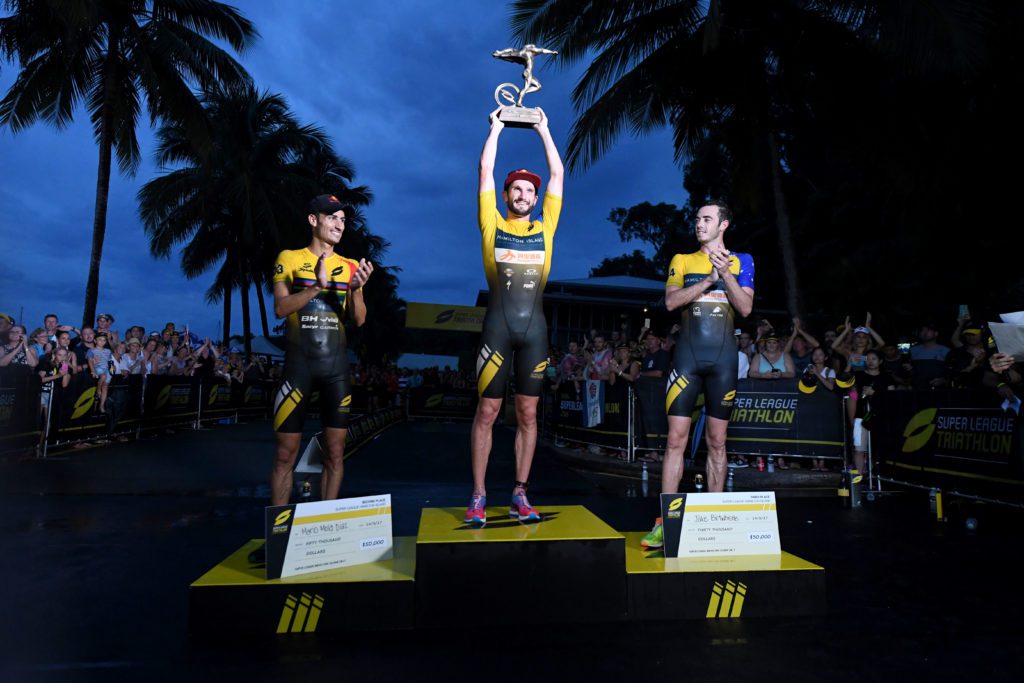 Two days of searing heat and humidity were replaced with torrential rain early in the afternoon of Day 3 of Super League Hamilton Island. The temperature may have been cooler but athletes were still feeling the heat with the pressure-cooker Eliminator format being unveiled. The three stage race saw athletes eliminated in each stage with race tactics playing as much a part as pure speed. Dual Olympic Champion Alistair Brownlee was a pre-race casualty withdrawing from Eliminator as a result of illness.

In Eliminator stage one athletes were vying for a top fifteen finish position to progress through to stage two. In familiar fashion, Richard Varga (#12) was first out of the water before athletes made their first ascent up a wet Mango Tree Corner on the bike leg. Following the afternoon down pour the slippery roads required strong bike handling skills and Ireland’s Ben Shaw hit the deck on the first hairpin turn of the bike course and was forced withdrew from the race. He was the first to be out of the race but it was Cameron Dye (#08) who was the first athlete to feel the wrath of Super League Triathlon’s Eliminator format as he finished in 16th place following the stage one run leg and was joined on the sidelines for stage 2 by Josh Amberger (#27), Dmitry Polyanskiy (#77), long course supremo’s Brent McMahon (#83) and Terrenzo Bozzone (#13), New Zealand’s Daniel Hoy (#22) and Icelandic wildcard Sirgudur Orn Ragnarsson (#57).

Richard Murray (#07), in the hot seat for a $100,000 winner’s cheque, raced smartly in stage 1 remaining well within the front pack but did not push the pace. Mid run Murray was in in 14th place and visibly seen counting the 13 athletes in front of him at the run turn to ensure he was in the optimal position to finish inside the top 15 in stage 1 without expending any more than he had to.

Stage Two saw athletes battling for a top 10 position to progress through to the final stage of Eliminator.   In what had been a relatively quiet week, Rio bronze medallist Henri Schoeman (#04) came out to play early on the bike leg of stage two and pushed the pace, but it was Ryan Fisher (#10) who led out on the run and eyed off a stage 3 berth. A group of ten quickly formed at the front of the race before Norway’s Kristian Bluumenfelt (#02) led them across the line to claim his second stage win of the day.

18-year-old Matt Hauser (#33) announced himself on the world-stage at Super League Hamilton Island but was the first athlete to miss the cut in stage two after an 11th place finish after a valiant run leg. He was joined on the elimination list by Andrea Salvisberg (#69), Alessandro Fabian (#88), Crisanto Grajales Valencia (#06) and Jorik van Egdom (#21).

Following the completion of stage two Richard Murray was interviewed in the recovery zone following stage two and appeared confident of a title win claiming he would attack the bike course – “big gear, no fear”, he said and predicted at 2:50 pace on the stage 3 run.

With 14 of the world’s finest athletes sidelined for stage 3 they became enthusiastic spectators as their fellow warriors took to the pontoon for Stage 3 start in a race that would decide who would take home the Eliminator title and the winners cheque of $100,000. At the start of stage three Murray stood atop the overall series leader board on 40 points with Mola his closest rival on 31 points. A seventh place or above finish would guarantee Murray the title.

Stage 3 would crown the winner of Eliminator and following a tight swim Australia’s Ryan Fisher went out hard on the bike to set up a sixteen second lead into T2 knowing that if were to claim Eliminator he had to gap the stronger runners. Fisher held on until lap two of the run, however, the run came down to the three dominant runners of Super League Hamilton Island with Murray, Mario Mola (#03) and Australian superstar Jake Birtwhistle (#44) quickly bridging the gap to Fisher and subsequently setting an incredible pace at the front. It was Mola who made the first break among the lead pack, dropping Murray in the process, but it was Birtwhistle who looked cool and calm as he sat on the Spaniard’s heels before unleashing a devastating sprint to claim the win and the Eliminator title from Mola and Murray.

But it was Murray, with a third-place finish in Eliminator and victories in Triple Mix and Equalizer, who was the big winner on the day amassing a total of 56 out of 60 points across the three days of racing to take home $100,000 and the Leonid Boguslavsky Champions Trophy as the overall winner of Super League Hamilton Island.

The top three finishers of Eliminator also made up the overall podium finishers for Super League Hamilton Island with Mario Mola in second place (49 points) taking home the second place cheque for $50,000 and Birtwhistle capping off an incredible race week with third place overall (48 points) and receiving $30,000.