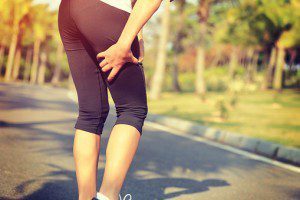 The iliotibial band, for all the problems it seems to cause runners, is quite important.

For all its importance in running, researchers don’t know a lot about how it helps store and release energy while humans walk and run. Carolyn Eng, a former Harvard student, is learning that, though it may not have evolved specifically for running, The IT band certainly useful in it (it would be one of many adaptations humans have which make us extremely good distance runners).

“We looked at the IT band’s capacity to store energy during running, and we found its energy-storage capacity is substantially greater during running than walking, and that’s partly because running is a much springier gait. We don’t know whether the IT band evolved for running or walking; it could have evolved for walking and later evolved to play a larger role in running.” Eng told the Harvard Gazette about her research.

The IT bands, according to the research stores 15-10 times the energy as the fascia lata in chimps’ legs.

Eng told the Gazette her research could lead to better understanding IT band pain, which is turn could mean quicker recovery times from the notoriously fickle, lingering pain associated with it.